Alex Hern delivers an update on the less-covered nations of the Arab autumn. 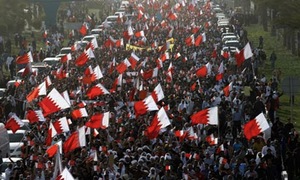 With the attention of the world focused on the extraordinary scenes in Tahrir square, we must not forget that the Arab Spring is more than just one country.

Syria faces renewed international pressure today, as the Arab League joins the EU in calling for an immediate end to the Government’s bloody crackdown.

In a special meeting in Cairo, the Arab League called on Syria to agree by Friday to admit a mission of 500 civilian and military observers to monitor the human rights situation and oversee efforts to carry out a peace plan that Syria agreed to on Nov. 2.

The Arab League suspended Syria this month after it failed to comply with the plan, under which it had pledged to withdraw all military units from the streets, stop killing protesters and allow the monitors to enter the country.

The announcement from the Arab League ministers came after the European Union said Thursday that safeguarding civilians against President Bashar al-Assad’s ferocious crackdown had become a priority.

“Protection of civilians in Syria is an increasingly urgent and important aspect of responding to the events in country,” said Maja Kocijancic, a European Union spokeswoman, in a statement.

The nation seems to be slipping ever closer to all-out civil war, with large parts of the country under the effective control of the rebels. The International Crisis Group reports (pdf):

There no longer is a permanent loyalist military presence in parts of Idlib, Hama and Homs governorates, a situation that enables the armed opposition to further regroup and organise. The governorates of Dayr Zor and Deraa appear on the verge of following a similar path.

As defections mount and the army is under ever greater stress, there is reason to doubt that the regime can muster sufficient military resources to reverse the trend. Talk about creating safe-havens on the Turkish and Jordanian borders could soon be moot; in many ways, Syrians appear on their way to doing that on their own.

Sadly, a situation with “safe havens” in the middle of an authoritarian state does not appear to be a stable solution, and so this can at best be a respite in the violence.

In Bahrain, meanwhile, an independent commission has released a damning report on the behaviour of the security forces during the protests there in February and March.

The report, released on Wednesday, presented a devastating portrait of what it called disproportionate and indiscriminate force often used by the security forces to repress protests.

“A number of detainees were tortured,” M. Cherif Bassiouni, an international law expert who led the inquiry, said at a news conference in Manama… Bassiouni added that the dimensions of the torture “proved there was a deliberate practice by some.”

The report by the panel, known as the Bahrain Independent Commission of Inquiry, also said there was no clear evidence that Iran had incited the unrest, as senior Bahraini officials have contended.

Although the report itself appears transparent and truthful, the reaction of the Bahraini government to it shows that not a huge amount has changed over this year:

The king… said that officials who engaged in abuses during the crackdown would be held accountable and replaced. He pointedly cited wrongs, although he portrayed them as having been committed by both sides.

And despite the commission’s conclusion that Iran did not play a role in the uprising, the king again insisted that Iran, a Shiite majority nation, had incited the unrest in Bahrain.

A statement issued by the government stressed…“the report does not confirm that there was a government policy of torture, mistreatment or using excessive force”.

If this is the end of the Arab Spring in Bahrain, it will mark it out as the only nation that has so far managed to successfully put down the uprisings with violence alone.

It will be the example that Assad hopes to emulate – although cracking down on an uprising is surely easier in a tiny island nation than in a country the size of Syria.

Finally, Morocco is today having its first elections since parliamentary reforms were introduced by the king.

The amended constitution gives parliament a greater role in the legislative process and strengthens the role of the prime minister, who now must be appointed by the king from the party which wins the most seats in the assembly.

The February 20 movement, which also called for a boycott on the referendum on the constitutional changes, argues the reforms do not go far enough and that the election will only give credibility to an undemocratic regime.

Although only a partial reform, the final results, when they are announced on Saturday, will hopefully pave the way to a brighter future for the Moroccan people.

• Syria: Both Assad and the demonstrators announce ‘no compromise’ – Alex Hern, October 31st 2011

• F1 should not become an instrument of oppression of the Bahrain government – Max Mosley, June 7th 2011