Luke Bozier looks at which dictator is next following the death today of Libyan despot Colonel Muammar Gaddafi. Syria president Bashar Al-Assad and Yemen should watch out. 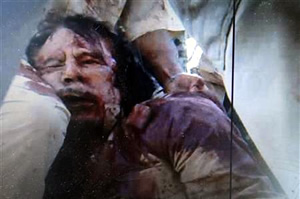 Eleven years in to the 21st century, and liberal intervention is coming of age. The policy, which owes a lot to former Labour leader Tony Blair, while often controversial, is a vital element in the success of Libya’s revolution.

Be under no illusion: Gaddafi would still be on his throne today, throttling his countryfolk, were it not for the laser-like military interventions of Britain, France and America in support of the rebel movement.

Today we learned that Colonel Gaddafi is dead. Gruesome photos and videos are all over the web; he was found, ironically after calling his people ‘rats’, in a concrete pipe underground waving around a golden gun (where was James Bond I ask?!).

The Libyans who captured him took justice into their own hands, and for right or wrong, ended Gaddafi’s life in a highly symbolic move.

The message is clear; dictators are no longer immune from demise. They’re not immune because people have now witnessed what revolutionary movements can achieve if they keep pushing through the fog of repression. The West, often seen as hypocritical and self-interested where it applies its military might, has been shown to be willing to act where it can in support of indigenous movements for serious change.

It’s been demonstrated, in the best way possible, that military intervention can happen and succeed, without an Iraq-style full-scale invasion. The new paradigm has been underscored by Gaddafi’s downfall, brought about by a rebel movement supported by Western military force.

So looking around the region and perhaps the world, we should ask who is next. Which dictator has outlived his welcome? The obvious answers lie in the Middle East. Syria’s President Bashar Al-Assad is clinging on to power quite remarkably. Despite killing thousands of his own citizens (in the name of law and order, apparently), he is still de fact ruler of Syria. He seems to be particularly difficult to get rid of.

Blocked by Russia and China on the UN Security Council, the West can do very little overtly at the moment, but attention should be focused on what assets the West can use now to support the nascent Syrian uprising.

Further afield, Yemen’s President is also due an exit shortly. Perhaps he’ll be smart and go of his own free will, lest Yemen witness similar scenes to Libya today.

Beyond the Middle East there are sticky dictators hanging on to power in Uzbekistan and Turkmenistan in Asia, and Robert Mugabe, Omar Bashir and Idriss Deby in Africa. Robert Mugabe succeeded in seeing off something of a revolutionary movement at the last election in Zimbabwe; perhaps at the next election there will be a flash point which could end his decades-long rule.

Whichever dictator falls next, I’m sure many of them will be paying attention to today’s events in Libya. They might get their passports and cash stashes ready ‘just in case’. They’d be wise to stand down and get out of the way of the destinies of their peoples.

Democracy belongs to every man; dictatorships are a dying breed, and sooner or later they will all be extinct.

29 Responses to “Gaddafi has underscored the new paradigm; who’s next?”