The UK economy barely grew in the second quarter of 2011, GDP up just 0.1 per cent, as the IMF said deficit reduction should not be at the expense of growth. 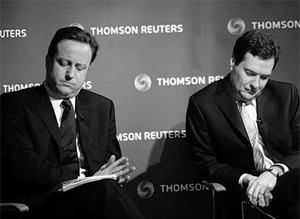 The UK economy barely grew in the second quarter of 2011, GDP rising just 0.1 per cent – down from its initial 0.2% estimate.

The timing could not have been worse for the government, the depressing figures emerging in the run up to David Cameron’s speech to the Conservative party conference this afternoon, in which he will signal no change in the coalition line, insisting:

“Our plan is the right one and our plan will work.”

Responding to the grim news in the UK and the eurozone – Italy’s credit rating was cut by Moody’s overnight – the IMF said a stimulus was needed, that a eurozone solution is “overdue”, and warned governments against pursuing deficit reduction at the expense of growth.

“The pursuit of nominal deficit targets should not come at the expense of risking a widespread contraction in economic activity… finding a durable solution to the euro area sovereign crisis has become more than overdue.”

On the UK economy, the headline figures (pdf) from the ONS show:

• UK gross domestic product (GDP) in volume terms increased by 0.1 per cent in the second quarter of 2011;

• Output of the production industries fell by 1.2 per cent, within which manufacturing rose by 0.2 per cent;

• Output of the service and construction industries increased by 0.2 per cent and 1.1 per cent respectively;

• Household final consumption expenditure decreased by 0.8 per cent in volume terms in the latest quarter;

• In current price terms, compensation of employees increased by 0.4 per cent in 2011 quarter two.

And to further dampen the mood, the IMF also warned a global recession in 2012 “can’t be ruled out”, citing the possibility “activity will turn downwards”.