Home secretary Theresa May, previously best known for wearing kitten heels and describing the Tories as “the nasty party”, has made what is likely to be the best blunder of the conference season.

Speaking to the Tory conference on so-called abuses of the Human Rights Act, she said:

“We all know the stories about the Human Rights Act. The violent drug dealer who cannot be sent home because his daughter – for whom he pays no maintenance – lives here. The robber who cannot be removed because he has a girlfriend. The illegal immigrant who cannot be deported because – and I am not making this up – he had a pet cat.”

Unfortunately for her, as was confirmed by a spokesperson for the Judicial Office shortly after, she was indeed making it up:

“This was a case in which the Home Office conceded that they had mistakenly failed to apply their own policy – applying at that time to that appellant – for dealing with unmarried partners of people settled in the UK. That was the basis for the decision to uphold the original tribunal decision – the cat had nothing to do with the decision.”

Even justice secretary Ken Clarke was driven to intervene:

“I’ve never had a conversation on the subject with Theresa so I’d have to find out about these strange cases she is throwing out.

“They are British cases and British judges she is complaining about. I cannot believe anybody has ever had deportation refused on the basis of owning a cat. I’ll have a small bet with her that nobody has ever been refused deportation on the grounds of the ownership as a cat.”

The error moves from humorous to damaging when you learn the speech had been approved by the “quad”, David Cameron, Nick Clegg, George Osborne and Danny Alexander. As well as showing the shocking incompetency of their fact-checking – the original story was debunked in November 2009 – it demonstrates how far the Conservatives will go to discredit the HRA.

Although it was the most obviously incorrect government statement on the act, merely being untrue isn’t enough to make it stand out, as Shami Chakrabarti points out:

“[Theresa May] well knows that the human rights act leaves the last word on immigration control to parliament. Perhaps tomorrow the prime minister will explain how he is going to scrap the HRA without ceding more decisions to European judges in Strasbourg. Why put your party at odds with 93 per cent of people who value human rights protection in this country?”

Amnesty International UK is not happy with home secretary Theresa May, accusing her of “tangling herself up in contradictions in her apparent attempt to play to the crowd”.

Tara Lyle, policy adviser, said: “The human rights act is often made into a pantomime villain. In fact, it is a list of protections that apply to every person in our society. That someone in Theresa May’s position can be so misinformed as to parade out a story about someone being allowed to stay in Britain because of a cat, is nothing short of alarming.”

May, who coined the term “nasty party”, is probably wishing she was seen as nasty right now, rather than merely incompetent.

Her party, however, is doing a great job at justifying the term – Political Scrapbook has dug up this leaflet, proudly displayed for sale in Manchester: 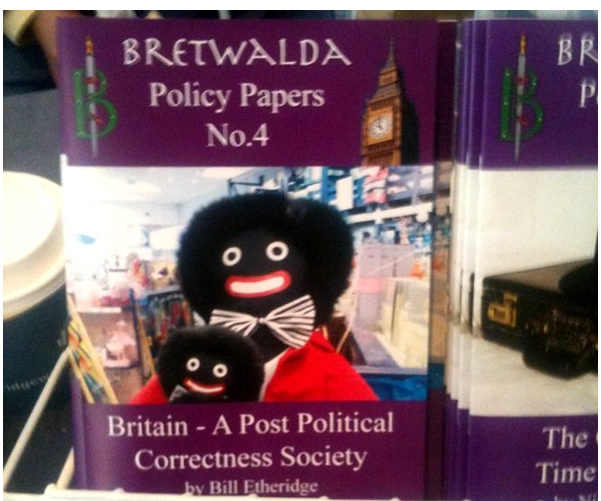 As much as the term may now have been devalued, we are not making this up.

20 Responses to “Kitten heels May gets in a cat flap”