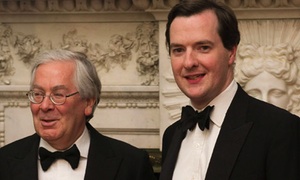 That we’re already into the next banking crisis a month after the coalition kicked Vickers’ banking reform into the long grass is a deep irony.  Philip Blond’s view of how the US subprime crisis spread,

obviously inspired the thinking behind the report: Vickers’ firewalls were meant to separate the local economy from stormy seas of international capital, but it’s too late now.

Since July, there has been a seize-up in banks’ wholesale funding markets.  In the same way a fear about a US or a UK bank created the crisis in 2008, the seize-up has been caused by the fear of the capital weakness of a eurozone bank.  The problem in both cases was that while each bank knows its own exposure to each eurozone bank, it doesn’t know the exposure of those banks to all the other banks, and capital is so low in all banks that the fear of lending to a bank with too high exposure stops any interbank lending.

The banks are reacting faster than politicians to the summer funding freeze by starting to reduce the size of their balance sheets. £26 billion of UK loans are reportedly up for sale already according to Saturday’s Telegraph.  This morning the FT reported on the sale of Lloyds £1 billion real estate loan portfolio.  These are just UK banks selling assets.  The real risk is sales from the eurozone because they will be much greater.  Over the course of September, the three large French banks have announced that they will sell €300 billion of loans in the next 12 months.

Such huge amounts of selling reflect the mind change in bank shareholders about the level of capital.  Prior to this summer, shareholders had made clear to regulators that they were unwilling to make equity capital available to allow banks to reach the new higher capital ratios that regulators wanted.  Politicians, lobbied by the banks, have allowed shareholders a delay, and gambled (wrongly) that there wouldn’t be another financial crisis in between.

As the current crisis unfolds, shareholders have seen that regulators were right, capital ratios were too low, but because bank share prices have fallen so much in the last 3 months shareholders fear that recapitalisations will dilute their current shareholdings too much.  Instead, they are forcing banks to raise their capital ratios by reducing the asset side of the ratio: by selling loans.  The problem within the UK is that the economic and regulatory backdrop for these sales mean they could rapidly change into a fire-sale followed by a mass liquidation.

There will be a home-bias to this selling because the banks won’t want to affect their domestic market.  So sales will fall disproportionately on foreign markets, such as the UK. Secondly, because the UK didn’t insist on higher capital ratios, our banks are exposed to worries about their capital strength and UK banks shares have also fallen.

The banks are responding to the depressed share prices by also selling loans, and will be both unwilling to take on these new loans from foreign sellers, but also they will be reluctant to dilute their shareholders to raise equity to make space for new loans.  Additionally, following a year of zero growth, UK loans will look doubtful, so if the foreign banks fail to sell the loans, they may be more inclined to force the borrowers into liquidation.

Because the eurozone banking problems are not isolated to France, the German, Italian and Spanish banks will all be looking to sell UK loans.  The collapse of the Icelandic banks in the UK is a taster to what happens in such a liquidation scenario. Many UK high-street names that the Icelanders had lent to went into liquidation because no other bank could refinance the loans.

Iceland had external debt of “only” €50 billion. The UK’s share of the coming liquidations could be ten times larger. If there is no solution soon to the eurozone the huge deleveraging of the eurozone banks, will be mass liquidation the like of which we haven’t seen since the 1930s with all that will mean for unemployment and house prices.

To stop this liquidation, there needs to be a proper resolution to Europe’s problems.  Both a bailout of the banks – the IMF estimated $380 billion last year before the sovereign crisis; the cost of the sovereign crisis is another $200 billion – followed by a boosting of the size of EFSF.  It is likely, however, that boosting of the EFSF to David Cameron’s “big bazooka” size will need external help. And at the moment the level of Eurozone government bond yields present a strong case for coordination internationally to make the bazooka big enough.

If seven per cent government yields has been the danger zone level when the bazooka would have to be fired, currently the yields on Spanish and Italian bonds are an enormous distance from that level at 5 per cent and 5.5 percent respectively.  That should give non-eurozone governments enough confidence that their support will be unlikely to be drawn down.  Then, Hank Paulson’s comment to congress that “If you have a bazooka in your pocket and people know it, you probably won’t have to use it” becomes a real one.

However, although David Cameron wants a bazooka, at the moment it looks like he’s unlikely to help with the ammo. While the coalition recognizes the importance of the resolution of the eurozone problem – George Osborne named it as the UK’s biggest risk last week – Osborne also told his party conference that his message to Europe was that “they have to sort out their problems”.

Despite the benefits the UK will have from a resolution of the eurozone crisis, the coalition seems content to sit this one out on the benches. But without the UK’s help boosting the EFSF, we’re unlikely to find a bazooka big enough to solve the eurozone crisis.

If the crisis escalates, it is clear that the Bank of England won’t help the UK economy. Mervyn King continues to insist that its balance sheet must remain clean and untouched. During the 2008 crisis the Bank of England’s independence wasn’t threatened by this decision because they could hide behind the most fiscal interventionist government.

Even now, Mervyn King’s insistence on keeping the Bank away from such lending has forced George Osborne into making the HM Treasury lend direct. However in the future, Mervyn King will be under huge pressure to follow what Ben Bernanke did in the winter of 2008. Then, the Federal Reserve complemented the administration’s interventions and contained a vicious cycle of liquidations by lending directly to all and sundry.

And George Osborne’s announcement that he’s found an Enron-like way to lend to SMEs without increasing the national debt won’t help us much either. As an add-on to aggregate lending in a recovering economy his plans have some merit. But, by restricting the asset purchase scheme to buy only SME loands, in a scenario of mass liquidation Osborne’s plans are just a TARP-light, and therefore useless.

Since 2008 when the US Treasury ditched TARP’s asset buying in favour of Gordon Brown’s three-pronged package for the banks of capital, liquidity and term funding, there is no longer any debate about what’s needed in such a scenario.

A TARP enables banks to continue liquidating loans to satisfy shareholder pressure to reduce their balance sheets. It will not create new lending that’s needed to stop the liquidation.  This is also why current proposals to let the asset purchase scheme buy bank bonds won’t help. If liquidity becomes an issue for the large banks, this can be solved by reopening the term SLS. If the bank’s aren’t lending it’s because they don’t have high enough levels of capital.

The coalition’s decision to leave bank regulation alone has left our domestic banks with too low capital to immunize our banks from this crisis.  They are now unlikely to be able to take on the lending we need. And neither the Bank of England nor the Treasury have anything in place to protect our economy from mass liquidations that will follow.