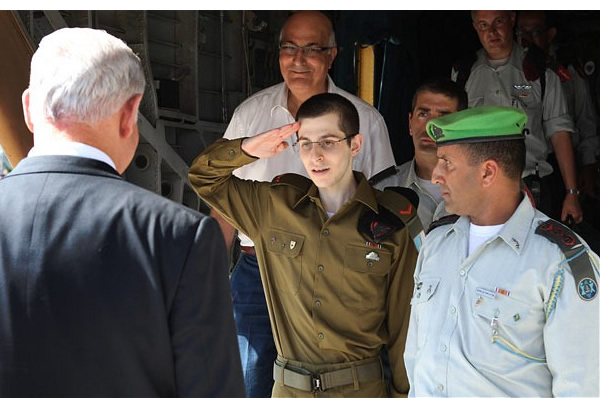 Gilad Shalit was released today after five years being held captive by Hamas, released in return for the freeing by Israel of 1,000 Palestinian prisoners.

Middle East peace envoy Tony Blair described the developments as “a moment of opportunity”, offering “a change of atmosphere” in the pursuit of a two-state solution.

Last night, in a Q&A session on “The Middle East in the 21st Century” at Chatham House, Senator George Mitchell called on both sides to “sit down and negotiate”, outlining the challenges past, present and future, for the Israelis and Palestinians – the rewards of success and the risks of failure.

“Let me just emphasise a point I made: In 1948, the United Nations proposed the partition, which would have created two states and an international city of Jerusalem. The Israelis accepted it, the Arabs rejected it, and the next day, six Arab nations invaded Israel, the first of many wars which an increasingly strong Israel has won.

“Almost every Arab leader I know, now, would gladly accept the partition plan that was rejected in 1948, because the reality is that the offers made since then are fewer and less attractive. And I said to President Abbas and I said to Chairman Arafat, many times: there is not a single shred of evidence that you can cite to me to suggest that the longer you wait, the offers are going to get better.

“They’re not – the 1948 partition plan is not now on the table, and never again will be, so in my judgement what they’ve got to do is to sit down and negotiate, and get a deal that creates a state and builds on it, and that will resolve the settlements issue. Then they’ll know what’s Israel and what’s Palestine, and anybody can build what they want in their own country.

“But the longer this goes on, the less optimistic one must be, because the opportunities for both are going to decline. Israel faces very, very serious challenges, there is a sense of common security now, but if history’s any guide it will not last.

“Demography: Right now there are five and three quarters million Jews in the area between the Jordan river and the Mediterranean; there are five and one quarter million Arabs, including Israeli Arabs, West Bank, and Gaza. But the birthrates are such that the demographers are unanimous in saying that the lines are going to cross very soon – not decades but years.

“And that Israel, if the two-state solution is lost, will have to choose between a Jewish state and a democratic state, and that is a choice they should not have to make.

“Secondly: They built a large wall to keep out suicide bombers. I lived in Berlin as a young man, in Northern Ireland for five years. Walls do provide a temporary respite, they do not solve the underlying problem, and the problem Israel faces now, to its existence, is not suicide bombers, it’s rockets. Hamas has several thousand, Hezbollah has 30,000, now Iran has rockets that can reach Israel.

“That’s the existential threat. The first step to dealing with it is to make a deal with the Palestinians.

“And the third issue is isolation and delegitimisation. We all know the votes at the UN, we’ve described them, the United States vetoed the settlement resolution in February; 135 countries were for it, only Israel and the United States against it. The vote on this resolution won’t be that lopsided, but it’ll still be decisive.

“And Israel’s relations with Turkey, with Egypt, major countries, are in the process of deterioration, very significant actions, and that’s a huge threat.

“And the Palestinians face the indefinite continuation of an occupation under which they have suffered for more than 60 years. So for both sides, the answer is get in the room, sit down, and negotiate an agreement that will be less than 100 per cent of what each wants, but much better than the alternative for both.”

The alternative, should negotiations fail, doesn’t bear thinking about.

• Blair: Shalit release may “provide the opportunity for an opening up” in the peace process – World Outside Westminster, October 14th 2011

10 Responses to “Mitchell tells Israelis and Palestinians: “Get in the room, sit down and negotiate””