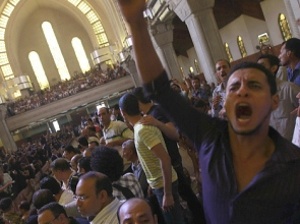 In his speech yesterday to the Royal United Services Institute, shadow foreign secretary Douglas Alexander spoke of an “extreme concern” over the religious freedoms being afforded to citizens in post-Mubarak Egypt.

Alexander’s remarks came after a weekend of violence in Egypt. Dubbed as the worst since the 18 day uprising that saw Mubarak overturned in February, Sunday saw at least 24 people killed and more than 200 injured after clashes broke out following a protest in Cairo against an attack on a church in Aswan province last week which Coptic Christians blame on muslim radicals.

Having mounted a protest march from the Shubra district of northern Cairo to the state TV building in Maspero Square where they intended to hold a sit-in, demonstrators spoke of how they had been assaulted by attackers in plain clothes before the facing a violent backlash from security forces.

Speaking to the Guardian, eye witnesses spoke vividly of how, having marched peacefully to the TV station, the army then fired live ammunition on the gathering.

Commenting on the scenes of violence, the shadow foreign secretary concluded:

“In Egypt, Mubarak is gone but his replacements in the Supreme Council of the Armed Forces do not appear to have given up on all the tools, like emergency decrees, that he used.

“Having just returned from Pakistan, I fear for a situation where a powerful military seeks to protect its economic and political role even after the transition to democracy.

“And the killing of 24 Coptic Christians in Cairo must be a cause for extreme concern amongst all the new Egypt’s friends, both because of what it says about religious tensions in Egypt and about the interim regime.”

Against a backdrop of such violence and intolerance of minority religions, the West must now consider where to go now. Having supported uprisings across the Middle East, seeing the overthrow of regimes in Tunisia, Egypt and Libya, the key priority is the building of stable democracies, democracies which are able to tolerate and understand how to live with minority communities.

Supporting the case for democracy as the tool needed to encourage and support religious tolerance, William Dalrymple, writing for the Guardian the day after Sunday’s attacks in Egypt, argued:

“The dilemma and fears of the Copts mirror that of Christian minorities across the Middle East. Just as the elderly Coptic Pope Shenoudah supported Mubarak right up until the moment of his fall, whatever individual Copts were doing in Tahrir Square, so the churches in Syria are still publicly supporting the Asad regime, even if many christian activists are at the forefront of the opposition.

“At the back of their minds, the Christian hierarchies are aware of the devastation of the Iraqi Christian community after the fall of Saddam, when over half the Christian population – some 400,000 people – were forced to leave the country in a wave of islamist pogroms. The Arab Spring, it is widely feared, could yet mark the onset of the final Christian winter for the forgotten faithful of the Middle East.

“Only elections and the advent of sympathetic and stable democratic governments across the region is likely to allay such fears. Sadly, at the moment this outcome seems less likely with every passing day.”

Having supported “the people” to win their struggles against regimes of which they had grown to fear and hate, the West must now stand firm and prevent those countries across the Arab world in which the fear now is of something equally bad.

The notion that religious freedom should be a hallmark of a tolerant society should for the west be a litmus test of the success or otherwise of the Arab Spring. A failure to achieve such tolerance will be a failure of the Arab Spring and the hope that it had built for many across the world.