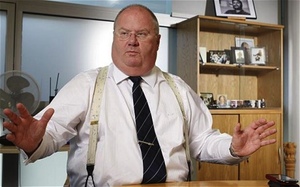 Today hasn’t been a good day for Eric Pickles – even Gideon was mocking him:

““Economic advisor to Gordon Brown”. I’m not sure I’d put that on my CV if I were Ed Balls.

It’s like “personal trainer to Eric Pickles”. Although I have to say, when it comes to chasing down council waste, no-one runs faster than our Eric.

Then his speech today hardly sets the room on fire. With Cameron taking one of his announcements (the abortive resurrection of right-to-buy), Osborne taking another (the freeze in council taxes), and him spoiling his third (BINS! BINS! BINS!), he didn’t really have anything to announce.

Instead, he got in a few digs at councillors with inappropriate spending decisions (strangely failing to mention Birmingham City Council’s £7,500 sponsorship of a right-wing think-tank), and attempted to defend his shoddily implemented planning reforms.

And finally, just when the man needs a few friends, who stands up to defend him but one of the maddest Tories left, in a party that isn’t short of such people:

When presented with the fact that Pickles’ unnecessary bin collections cost 70% of the entire Arts Council budget, his response? A fantastic piece of Tory stereotyping:
[blackbirdpie id=”119685726622330880″]

Beyond the obvious insults to opera watchers, there’s the implication that if you are a “real person”, you can’t be interested in the work of the Arts Council; you should just go back to watching EastEnders like all the other plebs. Then there’s the fact that it’s only thanks to the Arts Council that places like the ENO can offer their £10 tickets; if you do want opera to be limited to the elite, the best thing to do is to cut it’s funding.

Wallace should know about being careful in ones choice of words, given he apparently believes that using the word “trouble” in the context of Northern Ireland is a gaffe.

Fat jokes, boring speeches, and mad defenders. It may be the only time this blog ever says this: Poor Pickles.

5 Responses to “Pickles needs a friend”