The usually genteel Irish presidential elections have been replaced by a fantastically dirty campaign that has seen much mud flung, writes Kevin Meagher. 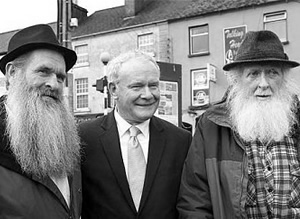 Irish voters go to the polls today to elect their ninth president; this usually genteel ritual has been replaced by a fantastically dirty campaign that has seen more mud flung around than you see in an average hurling game, writes Kevin Meagher

One candidate, former Eurovision winner Dana Rosemary Scallon, claims her car tyres were slashed, while former frontrunner David Norris has faced a barrage of questions about his views on pederasty and why he wrote a character reference for his lover who was charged with statutory rape on a minor.

But of the seven candidates vying for the presidency one man’s candidacy has attracted even more hostility.

“Is Martin McGuinness fit to be President?”, enquired RTE presenter Miriam O’Callaghan of all the other presidential candidates during a live television debate in a blatant piece of partisan broadcasting.

His candidacy has irked many in the Dublin establishment who see a northern interloper intruding into the cosy world of Irish politics.

The context is crucial here. Sinn Féin has traditionally enjoyed little electoral success in southern Ireland (not helped by the fact the party didn’t actually recognise the partitioned 26-county southern state until 1986). Earlier this year, however, they managed to treble their parliamentary representation, winning 14 seats in the 166-seat Dáil.

It was always a bridge too far to win the presidency this time around, but McGuinness has been polling in line with Sinn Féin’s general election performance, underscoring the fact the party’s electoral support is starting to solidify.

Sinn Féin always plays the long game. Their strategy in the north saw many stop-start moments throughout the late 80s and early 90s before they eventually supplanted their electoral rivals, the SDLP. It is not the individual result that matters but the cumulative trend.

Martin McGuinness’s performance looks set to confirm that Sinn Féin is becoming established as a political force south of the border.

Although he has met with a heavily biased Dublin media out to pick apart his campaign, McGuinness’s candidacy will have served to accelerate the process of normalising the Sinn Féin brand – the party’s key electoral objective south of the border. Still too associated with the IRA and “The Troubles” for many of the small ‘c’ conservative voters in the south, this is, for the party, a process of attrition.

Put bluntly, there are only so many times the party’s historic associations with the IRA can be thrown at their candidates with any effect. Like Tony Blair’s ‘masochism strategy’ after the Iraq war, McGuinness has taken all the brickbats and familiar criticisms in a bid to clear the way for Sinn Féin’s advance on southern politics.

This is a strategy that has previously worked in the north, with many unionists now willing to accept Sinn Féin as a legitimate political party. Indeed a Belfast Telegraph poll from two years ago showed McGuinness to be the most admired member of the Northern Ireland Executive, even by many unionist voters.

And McGuinness would hardly be the first IRA commander to become President of Ireland either. Éamon de Valera beats him to that record by half a century.

Indeed, everyone in Irish politics has dirty hands. The political system was forged in the aftermath of the 1923 civil war with the two main parties, Fine Gael and Fianna Fáil, emerging from those who supported and those who opposed the treaty with Britain that granted independence for southern Ireland and the partitioning of the country to create Northern Ireland.

So for Fine Gael politicians like justice minister Alan Shatter to attack McGuinness on the basis of his “exotic background” is eye-wateringly hypocritical. His own party was formed by the legendary guerrilla leader Michael Collins as a vehicle to win support for the 1921 treaty.

Fine Gael’s own candidate, Gay Mitchell, is absolutely nowhere in the field, which should sound alarm bells for Taoiseach Enda Kenny who, having swept to power earlier this year, now sees his party’s presidential candidate crash and burn.

The now clearly established frontrunner in the race is Sean Gallagher, a businessman and judge on the Irish version of Dragon’s Den. Recent polls have him around 40 per cent, with Labour’s Michael Higgins in second place on around 25 per cent. McGuinness comes in third. Although pitching himself as an independent, Gallagher is a former member of the national executive of the now-hated Fianna Fáil party.

Earlier this week he became embroiled in allegations he had solicited a donation from a businessman in return for facilitating access to then Fianna Fáil taoiseach, Brian Cowen. This may prove significant as the Irish public rightly blames the sleazy nexus between business and politics – and specifically Fianna Fáil’s notorious money-grubbing – for their current national impoverishment.

So although this presidential race has pivoted around Martin McGuinness’s candidacy, he looks unlikely to take up residence in Aras an Uachtarain – the official residency of the Irish President. He is not helped by the fact he cannot even vote for himself as residents of Northern Ireland cannot vote in southern elections.

Yet party strategists will take comfort from the latest opinion polls which show Sinn Féin is now the third largest party in southern politics. If the current coalition between the right-wing Fine Gael party and Labour founders, then any new coalition may see Sinn Féin entering government in the south.

This is the real prize they seek: a chance to govern in both northern and southern jurisdictions, fast-tracking the process of eventual national reunion.

In this respect, the denial of the presidential bauble by an insular Dublin political and media class that has gone hell for leather in attempting to stop McGuinness is a pyrrhic victory.

Around three million Irish people are eligible to vote across 43 constituencies under the single transferable vote system. The successful candidate needs 50% of the vote plus one. Early figures from the first counts from individual constituencies are expected this evening.

• The hate at the heart of the Orange Order – Kevin Meagher, September 15th 2011