As the Liam Fox/Adam Werritty scandal rolls on, it emerged this morning Werritty will be quizzed on his sources of income, reports Das. 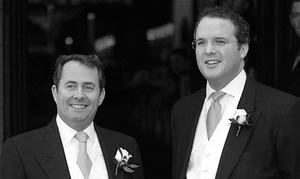 The Liam Fox/Adam Werritty scandal rolls on, today’s papers providing further discomfort for the defence secretary – as it emerged this morning Werritty will be quizzed on his sources of income.

Werritty will be asked by the inquiry investigating his links to Fox to set out his sources of income and a full list of his clients. He is likely to be interviewed at the Cabinet Offfice – possibly today.

Last night, the full extent of Werritty’s special relationship with Fox was revealed. In the 17 months since being appointed, Fox met with Werritty 40 times, 22 at the Ministry of Defence and 18 on visits abroad.

• Fox allowed Werritty to organise a meeting between him and a defence contractor in Dubai without informing civil servants;

• Werritty had regular access to Fox’s diary, something Fox agreed was inappropriate, and used knowledge of the defence secretary’s movements to arrange meetings for defence contractors;

• Werritty was present at a meeting between Fox and the British ambassador-designate to Israel, something Fox admitted was wrong;

• “Confusion existed about who is or is not a member of the ministerial party” on these trips;

• Fox knew Werritty was distributing a business card describing himself as adviser to the defence secretary in June, and told him to stop, but allowed him to produce a second card that still describing him as an adviser.

The most scathing verdict in today’s press comes from the Financial Times, whose editorial (£) states:

All this would be bad enough in the minister for paperclips. It is conduct beyond belief by a secretary of state running a department that manages a huge budget and is also responsible for the defence of the realm.

Mr Fox has admitted to poor judgment in attending a meeting in Dubai with a defence contractor at his friend’s behest. He has justified a discussion both men had with the Sri Lankan president by pointing to his own long-standing interest in that country.

The question, though, is whether these were isolated slips, or part of a broader pattern in which Mr Werritty became a “go-to guy” for businessmen and politicians seeking favours from Mr Fox. The fact that the defence secretary now admits to meeting Mr Werritty no less than 40 times in a year and a half – including 18 trips abroad – lends credence to the latter view…

It is doubtful whether a full inquiry can exonerate Mr Fox from what is now known. His lack of judgment renders his position untenable.

1. Who – if anyone – has Adam Werritty been working for and accepting money from since Liam Fox was appointed shadow defence secretary in 2006?

2. Did Dr Fox tell Ursula Brennan, his top civil servant, that Mr Werritty was involved in defence-related issues? If so, when?

3. Why did he not tell Ms Brennan in June that Mr Werritty was handing out business cards identifying himself as an adviser?

4. Did any British or US company put money into Atlantic Bridge, the neo-Conservative charity, in the belief that it would help them get access to Dr Fox and other key Tories?

5. Did Dr Fox do anything during his meeting in June with Harvey Boulter, a businessman, which would lead the latter to claim that “David Cameron’s Cabinet might very shortly be discussing the rather embarrassing situation of George’s [Buckley, chairman and chief executive of 3M] knighthood?”

With today’s Guardian editorial saying there are “forty unanswered questions”:

Fox’s statement raised more questions than it answered. His Labour shadow, Jim Murphy, posed several of them, listing a number of possible breaches of the ministerial code which Mr Fox is bound to uphold and which Mr Cameron is bound to enforce. These must now be investigated properly.

But the Labour backbencher Chris Bryant got close to another weakness in Mr Fox’s story. It is one thing to meet up with a friend when you are on a foreign ministerial trip, Mr Bryant accepted, but to do it 18 times in a little over 16 months with someone who is presenting himself to the outside world as the defence secretary’s adviser?

That’s quite a coincidence, especially when Mr Werritty held meetings at the same time, like the one in Dubai with the private equity boss Harvey Boulter, which led directly to private meetings with the defence secretary.

Who paid for Mr Werritty to be there? Whom did people like Mr Boulter think they were talking to when they met Mr Werritty, with or without Mr Fox? And what did Mr Fox himself think? He has been less than clear. The 40 meetings (Fox also met Werritty 22 times at the MoD) seem to go beyond friendship.

And in the Independent, Steve Richards writes:

In a government famous for policy U-turns, it is highly unusual for a minister to be sacked or moved. Policies change, but ministers tend to stay put. The pattern will not save Liam Fox, the current subject of seething speculation, and nor should it…

In the end, Cameron’s judgement must rely on the facts when they are established and I sense that is what will happen. The facts will either finish Fox or save him, a novelty in these situations when reason tends to play little part.

20 Responses to “How long can slippery Fox cling on?”