One Society’s Duncan Exley argues high executive pay damages the performance of the economy, and the businesses which themselves award the pay. 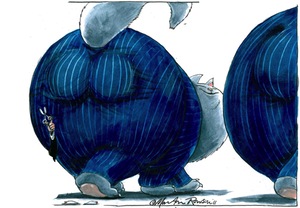 Today we saw one of the most effective anti-capitalist PR stunts in recent memory. But this was not the work of the protesters camped around St Paul’s and Finsbury Square.

I refer to the data released today by Incomes Data Services, which showed that FTSE 100 directors had a 49% year-on year increase in total earnings.

As the BBC pointed out, this is well above the average pay settlements of 2.6% for private sector workers (i.e. average employee pay is falling in real terms, because CPI inflation now stands at 5.2%).

Nor is this a new phenomenon. The equivalent data last year (pdf) showed that FTSE directors’ total earnings were boosted by 55%.

These pay rises are bad for business and bad for the economy, not only because of the PR damage they unfortunately inflict on business in general, but because such high pay rises damage the performance of companies and the economy.

It is often asserted that high pay is necessary to motivate and retain top talent.

However, the facts simply do not back this up: ever-rising pay has not been matched by rises in company performance. Numerous studies (and the financial crisis) show that stratospheric “incentives can result in a negative impact on overall performance”. The idea that executives will emigrate unless rewards continue to escalate is also unfounded:

“in the last five years only one FTSE 100 company has had its CEO poached by a rival, and that rival was also British”.

Remuneration practice in the UK over recent years sometimes appears to have been conducted in the (discredited) belief that directors are rare super-humans that need to be cherished and pampered, while the rest of us are mere human resources; however, studies (pdf) show:

“Wide gaps between top and bottom pay within an organisation harm performance.”

The bonus-driven rises in directors’ pay and the falls in employee’s real pay are not just an unfortunate coincidence. Directors can find themselves tempted to suppress wages in order to maximise the short-term profits on which their bonuses too often depend.

Remuneration committees are also often guilty of such an obsessive focus on the pay and performance of directors that they neglect to “be sensitive to… pay and employment conditions elsewhere in the group” (as the Corporate Governance Code requires). Requiring businesses to report on the ratio between directors’ and employees’ pay and requiring employee representation on remuneration committees will help to counteract this temptation.

The Department of Business, Innovation and Skills is currently consulting about how executive pay is set and reported. This is a great opportunity for the government to put in place polices which ensure that corporate pay practices are in the best interests of companies and the economy, by recognising that the whole workforce, not just the board, are important for successful business.