The economy, jobs and growth dominated proceedings in Parliament today, in the wake of this morning's disastrous unemployment figures, reports Shamik Das. 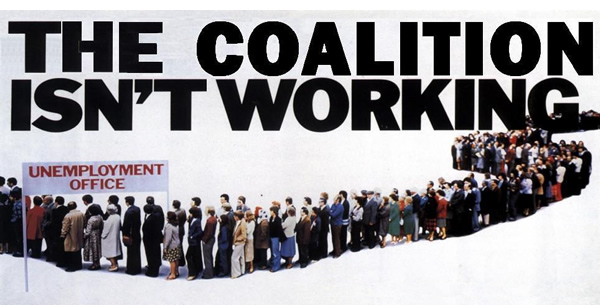 The economy, jobs and growth dominated proceedings in Parliament today, in the wake of this morning’s disastrous unemployment figures.

Though the headlines will be dominated by Ed Miliband and David Cameron, who clashed on the issue at Prime Minister’s Questions; Ed Balls and George Osborne, who faced each other at the start of the Opposition Day debate on the economy; and Rachel Reeves and Danny Alexander, who concluded the debate, there were many notable contributions from backbenchers.

One of those was Labour MP for Islwyn, Chris Evans, who spoke of the “real human tragedies” that lie behind the figures and statistics:

“The Tory benches will say, ‘it’s all Labour’s fault’, we will say, ‘it was all the Tories’ fault’, but the truth of the matter is this, where is it getting us?

“In my own constituency this evening, there are 2,000 people claiming Jobseeker’s Allowance, 40 per cent of those are under the age of 24, and behind those figures, there are real human tragedies, it’s about the kids leaving school with no hope for the future, their only hope might be, let’s hope they do not be driven into the hands of drug dealers, or get involved in crime because they believe there is no hope in the future, there is the hard working family coming home tonight, saying to his family, ‘I’ve been made redundant after 20 years’, and it his his wife who is worrying, and it’s the single parent, who is bringing up children on her own, who has just lost her job, what does she do?

“For me, anybody who loses their job, it’s a total tragedy, and that is why it’s so important in this amendment, that we use bankers’ bonuses to create youth jobs, that we do something to actually help people, not after six months of being out of work – as the prime minister said in his speech – but from day one.

“And I remember very well when I was a trade union official, what was said there when we were, when jobs were going, unfortunately were being offshored, but what was created was a scheme there, that when people were made redundant, the company matched half their redundancy to be used for training, for example some people decided to become driving instructors, some people decided, if they were in the Solent, they decided to build ships, to become shipbuilders or things like that, but it was something that would interest them, it was something they wanted to do, now I would like to see some encouragement, through the tax system, for companies who do make people redundant, some sort of idea there…

“The thing is when you’re unemployed, and I don’t know how many people in this chamber tonight have been unemployed, it’s soul destroying, it reduces confidence, in the worst cases, it brings about depression, and if anybody wants to see a microcosm of the economy then walk down the local high street; is there nothing more sad and depressing, than seeing the butcher, the baker, even the candlestick maker, all boarded up?

Also speaking today was Labour MP for Wolverhampton North East, Emma Reynolds, who addressed the “political motivation” behind the government’s economic policies that have resulted in the slump:

“The truth is, this government’s economic policy is politically motivated. His [George Osborne’s] calculation last year was, get the pain out of the way early on in this parliament, then offer some sweeteners towards the end of the parliament – when the economy will hopefully be growing again – and try and win a majority this time, so they don’t have to tolerate the Lib Dems in government, but their plan is hurting, but it’s not working.

“This government’s political motivation, its ideological committment to a much smaller state, is blinding them to the reality that their policies are making it actually more difficult to cut the deficit.

“With the government now set to borrow £46 billion more than they planned, they have created a vicious circle, with massive job cuts in the public sector, fewer people paying taxes, more people claiming Jobseekers’ Allowance, less revenue in government coffers, and therefore higher than expected government borrowing. These deep cuts are self-defeated and they should face up to that fact.

“And it isn’t just the Labour party who is telling the government they have got their economic policy dangerously wrong, businesses, commentators, economists, they are lining up to urge this government to develop a credible plan for growth, and even the Conservative chair of the Treasury select committee, who is not in his place, has criticised the government for the lack of a growth plan.

“He recently said that piecemeal policies for growth need a radical improvement, in places it is inconsistent, even incoherent, and in fact the Tory leadership was so worried about the forthright opinions of the honourable member for Chichester that he was literally bundled off in a private room for a quiet chat straight after the prime minister’s speech to his conference.

“The chancellor’s good friend, the IMF managing director Christine Lagarde, has also warned that this government should be prepared to change course, if the economy is headed for weak growth and high unemployment, and surely, that is exactly where we are now.”

The government should take note, not just of that but of all today’s contributions; as Mr Cameron himself famously once said: