Alex Hern reports on shadow foreign secretary Douglas Alexander’s RUSI speech today, in which he laid out how British foreign policy should respond to the Arab Spring. 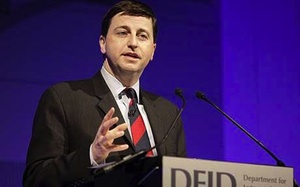 Shadow foreign secretary Douglas Alexander delivered a speech to the Royal United Services Institute (RUSI) this afternoon in which he reviewed, six months on, the lessons to be learned from the Arab Spring.

His springboard was a lecture given by Fareed Zakaria which outlined three three changes which led to the string of revolutions:

“Firstly, a youthful demographic spike – something associated with revolutions for hundreds of years.

“Secondly, a growing realisation throughout the Arab world that the West was ambivalent about the old rulers and wouldn’t necessarily prop them up in the face of popular discontent, derived from sources as diverse as the Wikileaks cables to President Obama’s Cairo speech.

“Satellite television gave people a sense of what was happening in their world that for years the state controlled broadcasters had failed to show. Online reporting allowed official histories to be challenged. And social networking allowed protesters to see they were not isolated individuals, but powerful majorities.”

He tempered that analysis, however, by applying a lesson learned from President Obama’s head of the National Institute of Health, Francis Collins:

Alexander’s effort, therefore, was to look to the long-run, to see which of the changes that have occurred in the region will have a genuine long-term affect, and which will fizzle out. He identified two major differences between the world as it was and as it is.

The first is a move from pessimism to optimism:

“Pessimism from each citizen that thought their individual complaints would always be crushed by over mighty autocrats. Pessimism from their rulers who trusted oil over the ingenuity of their citizens when it came to building more prosperous economies. Pessimism from the West that chose the devil we knew for fear of something worse.

“With the biggest youth bulge in recorded history – 65 per cent of the population under thirty – the next decade of the Middle East is going to be driven by optimism.

“Optimism, of course, can have different impacts in different circumstances. It was optimism that put the West on the right side of history at the time of Tahrir Square and it required optimism to believe that the Libyan operation could be conducted without large scale civilian casualties or a rallying around Gaddafi.

“But it was equally optimism amongst the pro-Gaddafi forces – that they could push back the rebels or that NATO would lose interest – that is keeping them fighting for so long.”

The second is a new paradigm of diplomatic relations in the area:

“When Turkey is taking quite strong steps in seeking to prevent violence in Syria, when the Arab League is calling for no-fly zones over an Arab country, when countries like Qatar are taking an ever more activist role…

“…the era of ‘zero problems’ diplomacy in the region appears to be over.“

If these two facets are the operative difference, how should Britain respond?

“Firstly, while other EU members will be understandably focussed on the crisis in the eurozone, it must fall to Britain to be constantly raising the future of North Africa in Brussels. More radical moves to open European markets to Egypt, Tunisia and a free Libya would benefit European consumers, cement new friendships and help ensure that political optimism isn’t met with economic disappointment over the medium term.

“Secondly, we need to address the multilateral system to the challenges facing the region. For Europe, it means finding a way to work more effectively with a pre-accession Turkey on diplomatic issues, like Syria, where we have a common cause. And it means using multilateral tools that can promote peace, which is why Labour has said the government should be willing to support the Palestinian call for statehood at the United Nations as part of continuing steps to achieve a comprehensive two state solution.

“Third and finally, we must address our diplomacy not just to states, but to the peoples of the Arab World at their moment of optimism.

“The World Service Trust is working to support Tunisian TV in the transition to being public service broadcasters, rather than just broadcasting the regime views. Do these services have an effect? If they didn’t, why would BBC Persian television has been subject to increasing and aggressive jamming from within Iran.

“And – going back to my starting point – that public diplomacy needs to develop for a world of technological change.

“In my view, that means Britain’s foreign policy needs to be clear that promoting unrestricted access to the internet is in our national interest and promotes our national values.”

Mr Alexander’s final point raises the awkward issue of the fact that, following the riots this summer, there were strong calls from all parties for a look at the prospect of censorship of online services. Thankfully, cooler heads prevailed – although a scenario where John Prescott is a cooler head remains a worrying one – but if we are to preach openness and condemn censorship, we must make sure we continue to practice it ourselves.