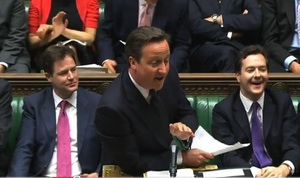 Two weeks on from making a grovelling apology to half the nation, David Cameron and the Conservatives have failed to detoxify their parties image to female voters, internal party research has revealed.

The Conservatives carried out the research after concern about female voters reacting angrily to public sector job losses and cuts to areas such as child benefit.

The findings revealed a vast gender gap in attitudes with:

• Twenty five per cent more women than men believing that the economy is going in the wrong direction, and 10 per cent more saying cuts are falling unfairly;

• Favourability towards the coalition 12 per cent lower among women; and

• Women twice as likely to think that children will have a worse life and less opportunity than their generation.

Overall support from female voters has slipped significantly for both the Conservatives and the Liberal Democrats since the general election in May last year.

Those poor results look unlikely to improve, given the expected publication of a report by venture capitalist Adam Beecroft later this month which will call for a u-turn on government policies on parental leave.

The Cabinet is apparently split on the issue.

George Osborne, Eric Pickles and Steve Hilton, the ‘blue sky thinker’ who proposed an abolition of all maternity leave and consumer rights laws, are said to be in favour, while Liberal Democrat equality minister Lynne Featherstone has come out forcefully against the proposals:

Featherstone told the Observer that Beecroft’s recommendation that the moves should be shelved was not acceptable and would be “swept away”. She also made her feelings clear over a recent “blue sky” proposal from Steve Hilton, the prime minister’s director of strategy, suggesting that the government could scrap maternity pay altogether.

Featherstone said: “Well, I might talk about scrapping Steve Hilton.”

Damaging as this policy is, however, even fixing it may not do much to repair the coalition’s tattered image; as the New Statesman argues:

This latest poll shows that women are not simply concerned about “female” issues like childcare, but are fundamentally concerned by the deficit reduction programme and the direction in which the economy is going. It will take more than Cameron presenting himself as “caring” to tackle this perception.

17 Responses to “Two weeks after ‘fixing’ it, Cameron creates a new “women problem””