David Cameron drilled a further nail in the coffin of the ‘greenest government ever’ myth, with his support for BP’s North Sea oil drilling plans, reports Joss Garman. 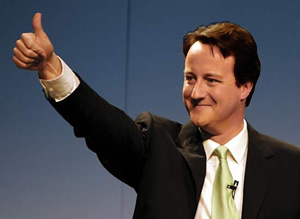 Yesterday The Independent splashed with the news that internal BP documents showed the oil major is planning for the possibility of the world’s worst ever oil spill happening off Scotland’s coast.

The Indy reported an admission from BP that in the event of a blow out, at what the company hopes will be their deepest ever UK drilling project, a spill could be twice as bad as the Deepwater Horizon accident.

BP admits internationally significant protected nature areas could be hit around the Shetland Islands and if there were a spill there’s as much as a 90% chance of the oil reaching Norwegian waters.

Twenty four hours later and David Cameron has travelled north with BP’s chief executive to personally welcome a wave of new investment in oil drilling off the Scottish coastline.

“After some years of decline, we now see the potential to maintain our production from the North Sea at around 200,000-250,000 barrels of oil equivalent a day until 2030.

“And we are working on projects that will take production from some of our largest fields out towards 2050.”

Today’s speech from Mr Cameron follows a string of announcements that have infuriated the environmental movement and suggest he is abandoning the centre ground on the environment as well as his ‘vote blue, go green’ theme.

Allegra Stratton writes in her column today that chancellor George Osborne continues to set his sights on ripping up environmental protections, which he sees as hampering growth – but here are some other recent examples:

• During the Tory conference, transport secretary Philip Hammond explained he will try to raise the speed limit on motorways, which will grow oil dependency and lead to a rise in climate change emissions.

• The chancellor knocked investor confidence in green industry in the UK when he used his speech to conference to warn he might try and review the UK’s carbon targets downwards.

• This prompted Phil Murphy, of the gas exploration BG group, to say:

“The chancellor’s comments are hard to see as anything other than a kick in the teeth for the low-carbon economy.”

Even the CBI said:

“What business wants above all else is certainty and anything that adds to uncertainty is unwelcome.”

• The chancellor is holding up billions of pounds of new investment in clean energy projects in the UK by delaying any decision over the support scheme for renewables, and throwing the whole scheme into doubt. Meanwhile, the pilot projects for Carbon Capture and Storage technology (CCS) are reportedly close to collapse.

• This follows a Cabinet row (which saw the PM back the chancellor in a row with Chris Huhne) that saw the Green Investment Bank denied of the power to either borrow or loan so the potential for billions of investment in new energy projects was sidelined.

• A number of senior Cabinet ministers have lashed out at The National Trust, Campaign for the Protection of Rural England and other conservation groups, accusing them of a “smear campaign by left-wingers based within the national headquarters” and “talking bollocks”, with Greg Clark saying the Trust is not a serious charity and acting out of “nihilistic selfishness”.

This after countryside protection groups warned the UK’s natural environment is at risk because of the Conservative party’s proposed planning reforms.

As Professor Tom Burke, who advised Michael Heseltine, John Gummer and Michael Howard on the environment, told The Guardian:

“The leadership are getting the politics badly wrong, as the change is being interpreted as the return of the nasty party. Green vision was central to Cameron’s detoxification of the party: without it what is left?”