Ed Jacobs discusses new data showing yet another split between the Tories and Lib Dems in government - this time over the proportionality of riot sentencing. 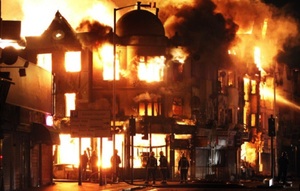 As the catfight between Ken Clarke and Theresa May rumbles on, new evidence has revealed the division’s between the coalition parties over sentencing policy in the wake of the summer riots.

The figures echo the views of the former chair of the Criminal Bar Association, Paul Mendelle QC who in August raised concerns that punishments were too harsh as a result of the courts getting mixed up in a sense of mass hysteria, and will once again raise tensions between the coalition’s left and right wings over the future of sentencing and prisons policy.

But it is not just David Cameron or Nick Clegg who will have food for thought over their respective party’s differences over sentencing. Having asked MPs to outline their views on the police’s handling of the riots, the ComRes figures will give the still new Metropolitan Police commissioner, Bernard Hogan-Howe, plenty to consider as he looks to re-establish confidence in his force.

Asked to outline if they agreed or disagreed that the culture at Scotland Yard is insufficiently robust in weeding out corruption, 58 per cent of all MPs agreed, compared with 34 per cent who disagreed, with a majority in each of the three main parties agreeing with this sentiment.

Lib Dem MPs were more likely to give the police the benefit of the doubt when it came to their handling of the riots, with 90 per cent saying that the riots had not undermined their constituents’ confidence in the police, compared with 47 per cent of Conservative and Labour MPs who believed that the public’s confidence had been undermined.

Members were polled also over the most significant factors they felt explained the causes of the rioters, with results showing:

• Sixty one per cent supported the idea of greed and opportunism being the most significant factor, comprising 71 per cent of Conservatives, 54  per cent Labour and 46 per cent of Lib Dem MPs;

• Conservatives were more likely to cite a lack of responsibility on the part of the rioters as a significant factor, supported by 52 per cent of their MPs, compared with 42 per cent of Labour members and 64 per cent of Lib Dems. Overall, 58 per cent of MPs supported this view;

• Interestingly, more Lib Dem MPs (48 per cent) cited a disregard for the consequences of criminality as a significant reason for the riots, compared with 38 per cent of Labour and Conservative members who supported this theory;

• Conservatives were more likely to blame a long term breakdown in social institutions such as marriage – 27 per cent compared with no Labour MPs and 8 per cent of Lib Dems;

• Twenty four per cent of Labour MPs cited a lack of job opportunities as a reason, compared with no Conservatives and 14 per cent Lib Dems;

• Only Labour MPs (7 per cent) cited anger at Government spending cuts as a significant reason for the riots.

But perhaps most soberly of all, 55 per cent of all MPs polled agreed that there was a significant risk of further public disruption on the same scale as the riots occurring again over the course of the Parliament. This was agreed by 48 per cent of Conservatives, 62 per cent of Labour members and 61 per cent of Lib Dems.

Summing up the results, Andrew Hawkins, chairman of ComRes, said:

“Despite the differences of perception between political parties it is clear that political and public confidence in the police has taken a real battering. On the riots, MPs are disturbingly pessimistic about the prospect of a repeat performance and the fact that almost one in three believes the failure to contain the riots was down to a failure of wider political leadership is particularly worrying.

Left Foot Forward approached the three main parties for reaction to the poll, all of which said it was their policy not to comment on polls.

• How to build a cross-party consensus on responding to the riots – Matt Cavanagh, August 16th 2011