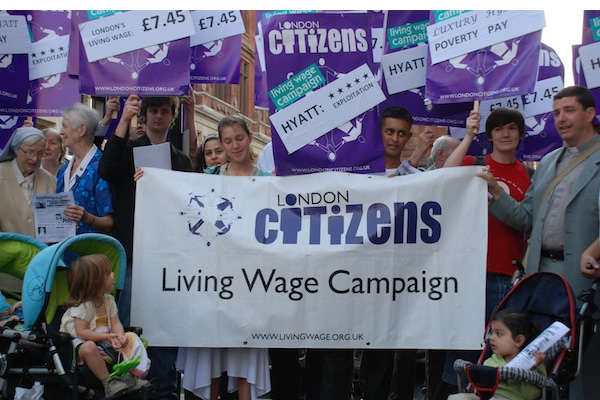 During the summer London Citizens targeted Tesco stores across London in response to the supermarkets refusal to pay their staff the London Living Wage of £8.30 an hour; Peter Carrol asks Neil Jameson, founding director of Citizens UK, to explain how the Living Wage campaign has evolved and to give an update on the status on their campaign against Tesco

Peter Carrol: Describe the history of the Living Wage Campaign up to the present?

Neil Jameson: Living Wage was launched in 2001 by London Citizens, following a review of what was happening to families, particularly in East London. The conclusion of our members was that they were not getting richer and they couldn’t plan ahead, and it was felt that we needed an alliance to try and protect their income so that they could spend more time with their families.

The campaign is focused on family life, and people having one job instead of two jobs because they are paid enough, so it’s a wage on which to live on to bring up your children with. It was a combination of this and the co-operation of major employers, but equally the pressure that we and others have managed put employers under  that has meant £17 billion going into the pockets of low wage workers, which affects at least 12,000 families.

Professor Jane Wills from Queen Mary University is researching the living wage in detail. This £17 billion has been won through pressure and persuasion on people to do the right thing.

The important thing about these interviews is that more people will get to hear about the aims of the living wage, which since 2004 has been set by the Mayor of London. Ken Livingston was persuaded by a big assembly to take the living wage on; to set it and to pay it, and then to encourage others to do so, and so was Boris Johnson in 2008.

But the GLA leads the field in the public sector employment; its £8:30 ph, it’s adjusted each year based upon inflation and other statistics by the Mayor’s office, and it’s a voluntary arrangement.

PC: With inflation running at a three-year high of 5.2%, the living wage is likely to go up by at least 50p at its annual review in April 2012. Do you think there will be a big increase next year?

And do you think this may give Living Wage employers who supply outsourcing to their clients a headache as they try to explain the rise to their clients, most of whom will be cutting back in other areas as the recession endures?

NJ: No – 2011’s was a big jump, which surprised even us. But it’s because of utility bills; this is the problem with taking into consideration a range of statistics. The equation for the living wage is much more realistic than the equation for the minimum wage, because it’s concerned with the cost of bringing up children in London. So because utility costs have gone up so much, 25%, the living wage rightly has to go up, because families have to pay their gas, electricity and water bills.

But I honestly can’t predict what will happen. It’s up to the Mayor’s Office, we have nothing to do with the figure. It is transparent and how it is fixed is their business, but it is a different equation to the minimum wage, as it’s about family life and all the costs, child care, transport, utility bills, which are required to bring up a family. It’s a much more realistic figure.

PC: As the UK faces significant economic challenges, with widespread public sector pay freezes and private sector pay increases averaging only 3%, do you think that those affected by the living wage should be immune from this austerity and have their pay pegged against inflation?

NJ: Children still have to brought up in London, and so that’s the pressure, not the pressure on business. We think it’s a moral wage, it’s a wage which employers should be proud to pay, because it does mean that childcare and all that goes with it is enhanced by families getting this money, which is coherent with the big society. Our regret, quite frankly, is that the government has failed to take the possibility of leading on the living wage seriously.

In 2010 David Cameron said to a big gathering of our members of citizens UK that the living wage was “an idea whose time has come”. When we asked him if he would build the principle of a living wage into government procurement policies and he said he would consider it, but the government is lagging behind the private sector.

PC: Are you really surprised by the Conservatives reluctance to embrace the policy? One of the key ideas behind the Big Society is that communities, charities and the private sector will be able to bid for any public service.

By opening up the tendering process in this way, the Conservatives are endorsing a view that the private market can supply services more effectively than the public sector, and this pro-free market view contradicts the regulatory interventionism underpinning the living wage; this is an irreconcilable difference between the two policies, no?

NJ: Well the bottom line is, that’s why we have governments, and how much people need to live off, we don’t take a position on the private sector or the public sector, but we do a position, particularly if its public money, that poverty is not acceptable.

So if taxpayers money is going to companies that don’t accept a responsibility to pay a living wage, which is meant to protect families and family life, London Citizens will very happily seek a meeting with them to persuade them of the benefits of paying a living wage.

PC: What is your relationship like with the Labour party, are you more confident in their response to the issue of fair pay?

NJ: Well we are certainly delighted that all Labour controlled authorities are now taking this seriously, Lewisham, Tower Hamlets, Islington, Ealing, Preston, and Glasgow have all implemented a living wage within their contracts and procurement policies.

PC: Some people have criticised the regionalisation of the Living Wage, that a Londoncentric approach has created different levels of pay in different cities and could lead to greater inequalities and rural poverty.

NJ: London Citizens would encourage employers to get in touch with the living wage foundation which we have established which is trying to police this. As far as we are concerned there is only two figures, and that would be our wish of many of the people we are working with either public and private sector companies; £7.20 outside London and £8.30 in London. That’s roughly what has happened, apart from £7.15 in Glasgow.

The outside London figure is set by Rowntree Foundation and Loughborough University, where there is a full time unit working on this, and inside London it is set by the Mayor. We don’t want the confusion which there is in the States where there are indeed several rates and every city has a different figure.

PC: Just a few words on the larger employers you have targeted for protests. The Tesco’s flash mob protests gained you a lot of media coverage over the summer, but they seem to have died down?

NJ: I think we have met twice with Tesco’s and are having some serious conversations with them about the possibility of them continuing to take the lead as a market leader on issues to do with family life, and therefore the principal of paying the living wage. There is no agreement yet and they are already a good payer within the sector but these are very constructive discussions and we continue to have them.

Our primary quest is to get them and the other market leaders not just to lead on food and production and service, but on wages and this issue of family life too. Practically every major law firm and every major finance company now pays the living wage, and invites people to bid for contracts on the basis of a living wage, that is a big precedent. Our aim is obviously to get all local authorities to do the same, and there is a growing trend amongst Labour authorities that they are doing that.

PC: Has the targeting of Tesco’s stopped?

NJ: Well no, we’ll do them if our members are keen to do them. If there is a company that tells us, basically that pay is none of our business we feel it is 100% our business, because they often employ people who are in our institutions.

The Tesco’s protests helped get us the meetings, but now we are having a conversation with them. There is no reason to do any form of demonstration if you are talking to people.

23 Responses to “Citizens UK: “The Big Society is flawed if people have to work two jobs””