Ed Jacobs examines the Conservative party’s rhetoric on Wales, and how it doesn’t match up with their actions, and looks at the future of Scottish Conservatism. 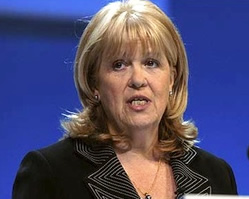 In her speech to the party faithful in Manchester, the Conservative Secretary of State for Wales, Cheryl Gillan yesterday launched an outspoken attack on the Labour government in Cardiff Bay, declaring to delegates:

“Under Labour you wait longer for hospital treatment. Less money is spent on school pupils than in England. And the Welsh economy is weaker than every other part of the United Kingdom. Labour’s legislative programme is timid and uninspiring. Their plan for government vague. Labour is tinkering at the edges.

“They’re not using the powers they’ve got. Or getting to grips with the challenges facing our country.

Her remarks were echoed by Andrew Davies, leader of the Conservatives in Wales.

Their remarks however highlighted what amounts to a sheer hypocrisy within the party over its attitudes to the devolved bodies, as whilst Scotland Office minister, David Mundell, used his contribution to the conference to attack the SNP for being prepared to take the praise when good things happen whilst seeking to blame London for all that goes wrong, in Wales both Cheryl Gillan and Andrew Davies seem guilty of selective memory, failing to recognise their own responsibilities.

Firstly, in stimulating the economy, the Welsh government remains hampered by its inability to vary taxes as well as the UK government’s decision to hand Wales a substantially worse spending review settlement than the devolved bodies in Scotland and Northern Ireland.

Gillan’s remarks also failed to recognise Carwyn Jones’ pledge within his Programme for Government to establish a new Welsh Jobs Fund with a commitment that it would support 4,000 young people into employment. This as the UK Government faced criticism for its failed economic strategy by Andrew Tyrie, Conservative chair of the Treasury select committee.

On NHS Waiting Lists, Gillan failed to remind delegates that under her own Government, waiting times within the NHS in England are themselves on the rise whilst even the respected Kings Fund was forced to apologise for having got it’s numbers wrong over NHS spending in Wales.

Indeed, as Andrew Davies argued that the NHS in Wales was facing cuts worth £1 billion, so too is the NHS in England. Writing for the Spectator’s “Coffee House” blog, Fraser Nelson explained:

“Before the election, the Conservatives promised they’d “protect” the NHS, which they defined as increasing its real-terms budget year-on-year. This is a rather dangerous promise because it makes ministers hostage to inflation.

“Now that inflation has surged, expectations have been revised upwards, and it looks like the NHS budget will suffer a real-terms cut. In its monthly update of City consensus forecasts, the Treasury has released new figures for inflation over the next five years. Apply the latest inflation figures to health spending in the last budget and it implies a £1bn shortfall.

On school spending meanwhile, as the Telegraph reported in October last year that the school’s budget in England would increase by a meagre 0.1%, the Government in Cardiff Bay has pledged (page 12) to increase spending on schools by 1% above the block grant received from London.

Whilst Labour in Wales undoubtedly has lessons to learn from its time in power and how to best use its new found legislative powers, Gillan’s attack was an abject failure to recognise the impact that her own Government’s decisions are having on Wales. Little wonder that Shadow Welsh Secretary Peter Hain responded:

At the heart of the problem faced by our country is the lack of economic growth. As a result there are no job opportunities. The Tories will inflict another lost generation on our young people unless action is taken to reverse the Chancellor’s strategy.

The one sensible thing that Cheryl Gillan could do in Manchester is to put the case for jobs and economic growth in Wales. I fear we will be disappointed as history has taught us the hard lesson that the Tories do not care about Wales.

In Scotland meanwhile, as David Cameron called for political parties to unite in taking on Alex Salmond’s campaign for independence it was his own party’s future in Scotland which seemed to be getting delegates fired up.

Ahead of a hustings event in Manchester involving the four candidates  bidding to take the helm of centre-right politics north of the border, the party’s only MP in Scotland, the Scotland Office Minister, David Mundell broke a vow of silence in attacking leading candidate, Murdo Fraser’s pledge to establish a completely new, independent centre-right force at Holyrood.

Writing for Scotland on Sunday, Mundell, who came out in support of Ruth Davidson’s bid for the top post in Scotland, explained:

I cannot support the disbanding of our party. It is a betrayal of our stalwart members and activists and the 420,000 people who voted Conservative at the UK general election.

“I had intended to remain neutral in this election contest, given my position as our only MP, and a government minister, but I cannot continue to remain silent. The prospect of winding-up SCUP and the threat of a serious split is too great.

“Let’s make radical changes, but let’s do so on the basis of building, not destroying. Then we can turn to the issues that really face Scotland.”

Yet for all the internal leadership navel gazing within both Scottish Labour and the Conservatives, what matters is not the organisational structures of the party’s, but producing a strong, coherent campaign in favour of Scotland remaining part of the union.  As the Sunday Herald warned in a comment piece:

“With a referendum on independence scheduled to take place in the second half of the current parliamentary session, and as the SNP juggernaut gathers momentum, there is a real need for reasoned and rigorous debate at Holyrood so that all the main issues can be rehearsed and aired.

Meanwhile, following a call by the Committee on Standards in Public Life for an end to the practice of “double jobbing” in Northern Ireland, Northern Ireland Secretary, Owen Paterson has pledged to use legislation if need be to ban the practices of members sitting as both MPs and MLAs.