Cameron's speech turned out to be a trotting out of well-worn Tory tropes on spending, deregulation, family values, NHS reform, disability benefit reform and so much else. But there's a lot of spin obscuring the truth. 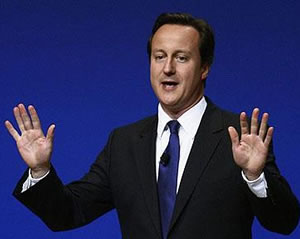 Cameron’s speech turned out to be a trotting out of well-worn Tory tropes, many as old the the previous leaders he praised, including, “of course, Lady Thatcher”.

So let’s take some of them. First of all the claim that it was Labour’s irresponsible spending and lack of regulation that led to the economic crisis. Apparently, “It was Labour gave us the casino economy” and Labour was responsible for “wasting billions and billions of your money”.

Except before the crisis, the Conservative leader promised to match Labour on spending, and George Osborne pushed the government to go further on deregulation.

As Will Straw wrote on this blog:

“In June 2006, George Osborne wrote in the Telegraph:

‘Many of the regulations that affect the City, such as the Markets in Financial Instruments Directive, originate with the European Commission.

‘I fear that much of this regulation has been burdensome, complex and makes cross-border market penetration more difficult. This is exactly the wrong direction in which Europe should be heading and it threatens the global competitiveness of the City of London.’

“Indeed, as late as August 2007 – when credit market were starting to freeze – the Sunday Telegraph revealed that the Tories had ‘a radical programme of cuts in red tape and regulation aimed at saving British businesses £14 billion a year’.”

Labour must take responsibility for its mistakes, but on spending and regulation, Cameron’s Conservatives were complicit. After all, the Tories backed Brown’s spending plans before 2008.

Having skated over this unfortunate  fact, the next part of Cameron’s logic is, of course, that Labour spent us into debt , and the Conservatives have to repay it:

“The only way out of a debt crisis is to deal with your debts. That’s why households are paying down their credit card and store card bills. It means banks getting their books in order. And it means governments – all over the world – cutting spending and living within their means.”

And yet, we are still deficit financing our public spending. Cameron went on to say:

“Our plan is right. And our plan will work.”

But growth estimates are being repeatedly downgraded, and so is the projected reduction in deficit reduction. As Cormac Hollingsworth wrote on Left Foot Forward in July:

“The coalition’s spending plans are factored into the Office for Budget Responsibility’s (OBR)’ new predictions that have followed the June budget, the November spending review and the March budget. Each time they made a lower prediction of growth for 2011 and a higher prediction for borrowing.

“The Treasury has indicated consensus growth for 2011 is 1.3%. Growth at that level for fiscal year 2011 would result in borrowing of 8.15% of GDP, just below that predicted for Mr Darling’s budget.

“From the OBR’s estimates we can project that if growth for fiscal year 2011 is below 1.1% then we could be in a scenario where the coalition is borrowing more than Labour.”

The Office for National Statistics’ estimates for the first two quarters of this year are 0.4 per cent and 0.1 per cent, leading to the real possibility than the government’s cutting will lead to less deficit reduction than there would have been under the Darling plan.

There is where the central political battles lie, but the regular fixtures made an appearance as well. So, for example, the spin beloved of politicians of all stripes that the ‘immigrants took the jobs’. As Cameron put it:

“An economy that works for everyone means sorting out welfare and immigration too. Welfare began as a life-line. For too many it’s become a way of life. Generation after generation in the cycle of dependency – and we are determined to break it. Part of our answer is controlling immigration. So we’ve put a cap on the numbers of non-EU immigrants allowed to come into our country to work. “

Apart from this passage committing the basic “lump of labour” fallacy, it also depends on a statistical trick which, as Declan Gaffney has shown on Left Foot Forward, can be used to show, for example, that the disabled took all the jobs that those on benefits should have taken up.

He also complained about  rigid, “outdated employment regulations” holding back British industry, even though we have less employment protection than every other OECD country apart from America.

In fact, the idea that job protection might help safeguard the families that the prime minister claims he cares so much about does not seem to have occurred to him. Nor that the government’s planned welfare reforms are going to incentivise family break up.

There was also the claim that the Tories were “the party of the NHS” even as waiting times rise and 400 public health experts warned Andrew Lansley in a letter to the Daily Telegraph that:

“The bill will do irreparable harm to the NHS, to individual patients and to society as a whole.”

That is before we get onto the lazy outdated view of the disability welfare system, which recycles the myth that hundreds of thousands of people on disability benefits are a legacy from the Thatcher’s government’s attempts to massage down the unemployment figures. As Cameron put it:

“For years you’ve been conned by governments. To keep the unemployment figures down, they’ve parked as many people as possible on the sick. Two and a half million, to be exact. Not officially unemployed, but claiming welfare, no questions asked.”

But with so much churn in a quarter of a century, this simply is not case any longer. The proportion of those on disibility benefits with serious conditions has been increasing for years. Indeed, seventy per cent of those with access to representation win thier appeal when government tests show they are fit to work – the same tests Cameron used to show how much abuse of the system has been going on.

We’re all in this together. But it turns out, some are more in this than others.