Tamasin Cave of Spinwatch exposes the cosy links between Tesco and the planning minister Bob Neill, given the government’s planning reforms in favour of development. 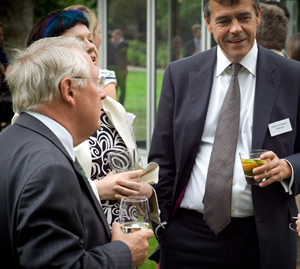 By Tamasin Cave of Spinwatch

The week before the government published its controversial reforms to England’s planning system, Conservative planning minister, Bob Neill, was snapped looking relaxed, glass of wine in hand, at a Westminster party.

The occasion is the invitation-only summer get-together of lobbying firm Hanover, run by Charles Lewington, John Major’s former press secretary. Neill is pictured with Lewington, and on his shoulder is Lucy Neville-Rolfe, chief lobbyist at Tesco.

Tesco will be a big winner under the new planning system with its presumption in favour of development.

The supermarket’s lobbying campaign continues at this week’s Conservative party conference, where last night it was the sole sponsor of the Conservative Councillors’ Association reception. The CCA represents nearly all local Tory politicians. A useful connection, one imagines, given their role in planning decisions.

Minister Bob Neill also has a busy conference schedule. Today sees him discuss the planning reforms with Conservative councillor and CCA board member, Gary Porter, one of four experts who helped write the Draft National Planning Policy Framework. The event is hosted by Savills, one of Britain’s biggest property brokers.

And on Tuesday, Neill is the guest of free market think tank the Adam Smith Institute and Berwin Leighton Paisner, law firm to numerous property companies and major developers, to discuss ‘where next’ for the planning system. Not to be outdone, house builders Crest Nicholson have also teamed up with a think tank, the Social Market Foundation, and invited the minister to discuss whether there are ‘Enough Homes In All The Right Places?’

Neill has accused those opposed to the government’s new planning policies of being:

“Left-wingers based within the national headquarters of pressure groups… going out of their way by picking a fight with Government.”

Given the access the supermarkets, house builders, developers and their representatives have to ministers like Neill, and the sustained, well-resourced lobbying they have been engaged in to push the reforms through, it’s hardly a fair fight.

14 Responses to “Tories, Tesco, vino and the presumption in favour of development”