Unions have promised the biggest campaign of “civil disobedience” ever seen - but what kind of tactics might they be considering? 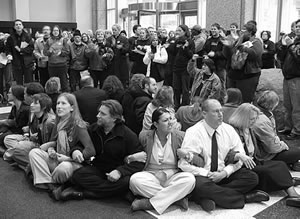 Dan Whittle is the director of Unions 21; he is writing in a personal capacity

Unions have promised the biggest campaign of “civil disobedience” ever seen in response to threats by the government to curb their influence in the workplace. But what kind of tactics might they be considering?

Some of Britain’s best known union figures including the General Secretary of the UK’s biggest union have used this weeks’ annual meeting of the TUC to advocate the increased use of civil disobedience.

The RMT’s Bob Crow said unions could learn from groups like UK Uncut, adding he wanted to see members “disrupting Bono at Glastonbury” to defend workers’ rights, while Len McCluskey, leader of Unite, cited the example of pensioners stopping traffic in Bristol by walking backwards and forwards across a zebra crossing.

Why are unions talking about civil disobedience?

Alternative methods of action that might lead to success are particularly attractive at a time when the government is obsessed with the bottom line and conventional industrial action and protest rallies seem to have lost some of their edge.

Despite the TUC’s huge rally in London earlier and industrial action from some unions earlier this year the government has not yet budged on their proposed changes to public sector pensions.

The limits on the ‘right to strike’ are severe

Even if a union goes through all the hoops and hurdles of ballots and notices the law requires, it is still difficult to call lawful industrial action, even after the Court of Appeal ruling earlier this year that prevents minor mistakes in balloting being used to halt strikes.

The coalition government has floated the possibility of further tightening the laws against strikes – increasing the pressure for unions to have a Plan B when it comes to the range of actions they can take outside of negotiation.

While strikes can be perceived as disruption, other means of campaigning have been shown to capture the public imagination and win support. Eye-catching forms of protest can attract support from individuals and organisations outside the unions. This is particularly important where the government is the employer and politicians can be influenced by voter power.

Where unions have worked together with organisations and individuals who share a particular goal they have found success. An example which forced a government U-turn was the sell-off of public forests, won with a broad coalition which included conservation groups and internet campaigns as well as unions, in actions such as tying yellow ribbons round thousands of trees.

There is risk in moving away from the relatively controlled and understood environment of traditional industrial action. Civil disobedience can get out of control and be both illegal and dangerous, and become a vehicle for people and groups who simply want to break the law, losing public support.

To reduce risk takes planning and resources which might otherwise be better used organising a safe and legal strike.

So, apart from blocking the roads and taking a pop at pop stars – what might we expect from union civil disobedience?

Union members will be familiar with public speeches, letters of opposition and signed public statements. Some may also be accustomed to the public and theatrical: mock awards and elections, the delivering of symbolic objects; teach-ins, sit-ins, ride-ins or even Wade-ins.

Below are three of the buzz words that have come to the fore in describing new forms of action:

Flash mobs: Flash mobs are impromptu meetings of large groups of people usually organised online or via mobile phone. In a German example, the trade union Verdi, which represents almost two and a half million employees in the retail and public sectors, organised 150 men and women to head to a supermarket.

The flash mob loaded up trollies with an assortment of goods before simply leaving them standing in the aisles. Instead of paying for the goods, the flash mob passed over cards with slogans like “Fair Wages” and “Fair Means More”. It interrupted business and some protestors were arrested.

It can also include community orientated action, as the father of reverse strikes Danilo Dolci, intended: he used the term to describe an action where the citizens of Partinico, whom he had come to help with their desperate poverty, mustered out and built a badly needed road to their community when the government had refused to do so or to issue them permission to do it themselves.

A modern example might include workers on strike using the time to do high profile voluntary work in the community, for example painting a community centre or planning a community garden. A reverse strike, being both constructive and resistant, can help keep public opinion on side and draw media interest.

Smart strikes: While there has been much talk of civil disobedience this week, the thrust of union attention will remain on traditional forms of industrial action. However, we are set to see more smart strikes, the hall mark being targeting action so that the maximum potential for public support is achieved.

Belgian transport workers achieved this when members of the Centrale Générale des Services Publics closed the ticket offices in Brussels and allowed a grateful public on to trains and buses for free. Earlier this year in England a dispute between a council (Southampton) and its workers led to parking wardens going on strike – hurting the coffers of the council but not local motorists.

15 Responses to “What kind of “civil disobedience” tactics will the unions use?”