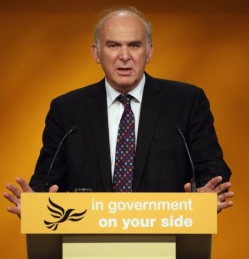 Larissa Hansford is a campaign assistant at One Society

Vince Cable’s speech at today’s Liberal Democrat conference could be criticised for making points of principle but lacking firm commitments. Unfortunately, these points of principle still need to be made and it is a positive thing that politicians are taking the issue of excessive pay and wage inequality seriously, despite opposition from influential organisations.

Miles Templeton, head of the Institute of Directors, is a case in point. His comment on the speech was that it’s “daft” to be talking about curbing executive pay, hoping that it’s just “conference rhetoric” because it isn’t something that would help the UK economy.

It is a sad irony that many of those who argue reducing CEO pay would threaten the economy also insist that raising low pay would do the same.

In reality, there is increasing recognition that that reducing inequalities of income and rebuilding the economy go hand in hand, especially if one recognises that people other than CEOs create wealth, and that they need to be properly rewarded too.

There is widespread concern that growing pay inequality is linked to increased economic volatility, with low income households forced to increase debt levels, high pay and bonuses creating a climate of short-termist risk-taking, and stagnation of pay at a lower level reducing consumption and risking stalling economic recovery in the UK.

So it is good Cable reiterated that whilst “there is absolutely nothing wrong with generous rewards for those who build up successful businesses and create wealth and jobs”, there is a problem with:

“…executive pay which, in many cases, has lost any connection with the value of shares, let alone average employee pay.”

On a less abstract level, there are also positive signs. Vince Cable stated his intention to continue consultations on strengthening the link between pay and performance, and implied an intention to make shareholder votes on remuneration committees binding. He also talked about making details of pay within private companies more transparent, both to shareholders and the public.

We will have to wait for the details. It is disappointing so little was said about Cable’s previously stated suggestion that employees could sit on remuneration committees, and that the focus of the speech was on the weak link of high pay to company performance, rather than the negative effects of high ratios on the wider economy, and on individual companies.

Unrestrained greed, and the inequalities it creates, are not only unacceptable, but are an inefficient way of running our society and economy.

We hope those ideas will emerge from the consultations, and that Cable’s willingness to take on assertions about the principle of fair pay will also lead him to take on those who assert the solutions – such as pay ratio reporting and broadening the membership of remuneration committees – are also dangerous or unnecessary.