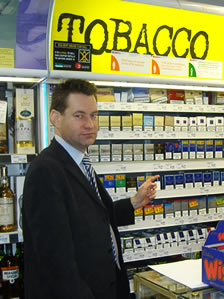 With a new poll showing support for Scottish independence outstripping opposition, Left Foot Forward’s Ed Jacobs warns that it is time for all supporters of the Union to wake up to the very real prospect of an independent Scotland

As Murdo Fraser today formally announces his bid to take the helm of the Scottish Conservatives, with a pledge to disband the party north of the border in favour of a new centre-right grouping free from control by London, the high wire act he is now playing has been laid bare for all to see.

New polling for the Herald by TNS-BMRB has revealed the proportion of Scots in favour of independence is now marginally ahead of those who would reject it – 39% outlining support against 38% who reject the notion. Twenty three per cent said they were unsure of how they would vote.

Responding to the results, Chris Eynon of TNS-BMRB, explained:

“For now, the ball is rolling in favour of the SNP and independence. However, a lot can change over the next two to three years.

“It does provide a stark measure of how attitudes towards independence per se have moved since the SNP first came to power in 2007. The decline in opposition is reflected more in a shift to ‘undecided’ than to ‘support’, which is perhaps not surprising. It would be a major change to move from opposing to supporting independence over a short period.

“What this does suggest is that resistance is being challenged and more people are being encouraged to reconsider their opposition to independence.”

The results are once again likely to reignite tensions within the Scottish Conservative party over the wisdom of Murdo Fraser’s call for a breakaway centre-right party, not least given Glasgow MSP and rival for the leadership at Holyrood, Ruth Davidson’s, clear condemnation of the move.

“I am proud to be a Scottish Conservative and Unionist. This is a destabilising distraction that will be welcomed by no one more than Alex Salmond.”

It comes as one Conservative MP in Wales has argued the Scottish Conservatives have simply been too slow to realise the extent of their problems.

“After we lost the general election in 1997 and then lost the Welsh devolution referendum, I was invited to write a paper on the direction of the party in Wales – as far as the Scots are concerned, they simply never got round to doing that. Very soon after the referendum we started to think about these issues. I wrote the paper. Very many things arose from that, including our decision to re-brand as The Welsh Conservatives.

“Contrast that with the situation in Scotland where the party remained in denial after 1997. They never went through the process of making the party identifiable in Scotland and have never been seen as sticking up for Scotland. Under David Cameron they have started this process. They have been talking to us in Wales about what we did and what we are doing to learn those lessons.

“If you ask me whether the answer is for them to scrap the Conservative name then I would say definitely not.”

But perhaps the most sobering and clear message is for Labour. The Scottish Conservatives, if Fraser is elected leader, will no longer be a credible champion of the Union whilst the Lib Dems remain tarnished goods in Scotland. For Labour, today’s polling should be a clear wake-up call that tackling independence has to be a priority and a priority for a new, strong leader with the authority and credibility to take on Alex Salmond.

As an editorial in today’s Herald argues:

“What today’s poll from TNS-BMRB demonstrates is the urgency and importance of remedying this situation. As Professor James Mitchell of Strathclyde University writes in The Herald today, there was a widespread feeling after the elections in May that millions of people voting SNP did not necessarily mean that those millions supported independence.

“But the fact that TNS-BMRB has reported majority support for independence should act as a warning against such complacency. If we are indeed sleepwalking into independence, as some more passionate commentators have warned, this poll could be the first wake-up call.”