The “Occupy Wall Street” protests that have hit the heart of New York’s financial district could be coming to the City of London. 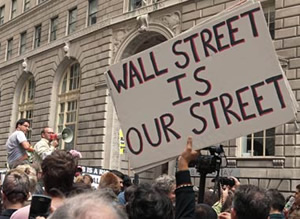 The “Occupy Wall Street” protests that have hit the heart of New York’s financial district could be coming to the City of London. There are reports tonight that the protests against unrestrained greed and feral capitalism could also be visited upon Madrid, Milan and Paris, according to a bulletin from the Department of Homeland Security’s National Cybersecurity and Communications Integration Center.

The New York protesters, numbering 1,000 at the weekend but down to 200 this morning, say they want reform of “the capitalist political system”, which they say “has been beholden to political machinations of the wealthy well before its founding”, and have called for “election reform”.

Their ‘Call to Action’ adds:

“We need to address the core facts: these corporations, even if they were unable to compete in the electoral arena, would still remain in control of society.

“They would retain economic control, which would allow them to retain political control. Term limits would, again, not solve this, as many in the political class already leave politics to find themselves as part of the corporate elites.

“We need to retake the freedom that has been stolen from the people, altogether… We call for a revolution of the mind as well as the body politic.”

As yesterday’s Observer graphically illustrated, the inequalities in New York appear starker than ever, the contrasts between South Bronx and the Upper East Side highlighting an ever growing gap between rich and poor:

“New Yorkers living in the city’s 14th and 16th Congressional districts – electoral districts with populations of around 600,000 each – often occupy completely different worlds. Their lives provide a shocking example of growing inequality in America, where the rich are leaving a growing mass of the poor completely behind.

“The numbers are stark enough. Last week a census report revealed that 46 million Americans live in poverty, the highest number ever recorded. At the same time, the richest 20% of Americans control 84% of the country’s wealth. Indeed, just 400 families have the same net worth as the total of the bottom 50%. America’s Gini coefficient – which measures inequality of income distribution – now nears that of Rwanda.

“The Gini figure is just a number – but to walk the streets of the 14th and 16th districts is to see that story of growing inequality in terms of people living almost next to each other but separated by education, job prospects, health, race and class…”

In South Bronx, amidst the gangs, drugs and crime, life expectancy is three years lower than on the Upper East Side, the murder rate four times higher and crime rate double; median household income is barely above the poverty level, 40 per cent of people live below the poverty line, and there are one ninetieth the number of Starbucks in the 16th than 14th…

“[In the 14th], food stamps are not an issue. The streets are crowded, luxury shops sell the latest fashions and French restaurants are doing a roaring trade…

“The finance industry is roaring again. Last year the ratio of wage bills to company earnings rose at 10 out of 16 major US and European banks. This year again will see bonuses worth hundreds of thousands of dollars for many and millions of dollars for the lucky few. Such payouts fuel the Upper East Side property market.

“A glance at an estate agent’s display on Madison Avenue revealed a townhouse going for $26m. Prefer to rent? Another could be had for $58,000 a month. Even a modest-looking two-bedroom apartment cost $1.9m. On 75th Street, one opulent mansion has just been sold by financier Christopher Flowers for $36.5m…”

Though as One Society’s Larissa Hansford wrote on these pages earlier this evening, greater inequality, a widening gap between rich and poor, excessive pay, sickening corporate greed, and low income households struggling to get by all exist here as well – so don’t be surprised if anger at the status quo is manifested in ‘occupy’ protests in the City of London sometime soon.

16 Responses to “Are “Occupy Threadneedle Street” protests on the way?”