Reports today that the national high street vacancy rate might stabilise at around 10% in the long term are further evidence of the need for a new planning system. 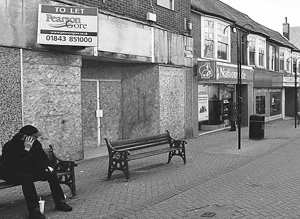 Jonathan Schifferes is a consultant for the new economics foundation (nef)

We learned today (£) that Oxford Economics estimates the national high street vacancy rate might stabilise at around 10% in the long term – further evidence of how the urgent need is to legislate a new planning system, which can help put the high street to work. This is timely research: after arriving in government and effectively ripping up the planning system, we have four weeks left to contribute to the public consultation on the new Draft National Planning Policy Framework.

No small endeavour: currently, we have millions of people without a place to work, and millions more unable to afford to rent or buy a building they can live in. Many of our high streets are also looking less inviting than ever, with poundshops and bookies on the rise.

One town is increasingly resembling a clone of another, dominated by national retailers accountable to international shareholders. A key concern for planners nationwide is how the new planning system will give communities and their local authorities the power to reinvigorate struggling town centres.

We need a vibrant public debate about how the planning system is part of a national effort to improve the nation’s quality of life, and the wellbeing of individuals (something we are finally going to measure, through a new ONS national statistic).

When we talk of economic growth, we must not lose sight of the fact that economic growth is only a means to this end. And nef (the new economics foundation) has long argued that high streets – the geographic centre of most communities – are where this endeavour needs to start.

But the battle lines of the current debate are depressingly familiar.

In one corner, with shades of green and grey, we have an alliance. Some are conscious of the environment: they don’t want anything to happen which involves using resources or harming mother nature’s ecology. Others tend to be from an older generation who have been able to capitalise on the long-term increase in house prices. They aren’t too keen for their suburban dream or country retreat to be subject to new neighbours and something that spoils the view.

They share the position that they don’t want any retraction from hard-fought planning designations such as Green Belt and Areas of Outstanding Natural Beauty. Neither group in this alliance is unjustified in its concern, but they tend to imagine the demand for additional buildings can be met entirely by bleak corners of brownfield urban land and recolonising the many abandoned terraced houses which blight some of the country’s most depressing streets.

In the other corner, we have Tory blue and corporate black. From their point of view, government control (“red tape”) usually stands in the way of prosperity, which is generated by (and for?) businesses. As they see it, we’ll grow our way out of the recent recession from the private sector rather than through public investment and borrowing: business as usual.

And if we can just empower local people to participate in making new neighbourhood plans and local plans, they will see the benefits of new development, and become advocates for this growth.

The draft NPPF has built on a long tradition of linguistic ambiguity in planning policy by talking extensively about sustainable development without explaining to planners, developers and communities what this actually means. The whole question is how we balance social, economic and environmental concerns over different time horizons. It is not enough to simply say we want all three, and pass the tough decision to the process of planning appeals and inquiries.

The alliances are likely to fall down when blue MPs answer to their angry grey constituents: reminding us all that local accountability has been plagued by selective participation (NIMBYism) for a long time. There is also an inherent contradiction in expecting homeowners or small businesses to encourage the building of new homes or new business premises next door to theirs.

At nef, we want to bridge the current divide that is threatening to derail planning reform and suggest some radical alternatives. Going back to traditional growth models will give us more of the same destructive growth: sprawling housing, far from services, and one-dimensional retail parks that you can’t walk to. It was also a model based on immense personal and ecological debt. When we talk of the financial crisis, let’s remember it is housing debt that made the house of cards fall down.

Could we judge any proposed new development by its impact on the wellbeing of those who will use the building to live, learn, work, pray and play?

Could we measure local economic impact and number of green jobs created, not just national GDP growth? Could we develop a sophisticated place happiness metric? – it can’t be more complex than counting the number of great crested newts displaced, or model-based forecasts of the number of shoppers who will need to turn left at a new roundabout, which is the evidence which currently underpins planning decisions.

As I’ve argued on these pages before, empty shops should be seen as an asset, in that they enable us to reimagine a new use of space for a new set of conditions. In the battle over the future of the planning, we’re fighting to inject this imagination.