Without a plan B, it seems likely all this month’s grim jobs stats and record bad figures are likely to be replaced by new ones, writes the TUC’s Richard Exell. 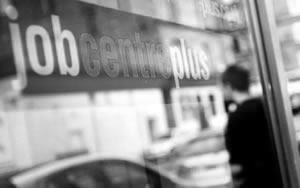 For anyone who came of age in the 1980s, today’s labour market statistics will have brought back their youth: a big jump in unemployment (with records for women and young people); redundancies going up; vacancies down; and the highest level of involuntary part-time employment since records began.

In the first half of the year, many of us wondered why the employment and unemployment figures were reasonably good, when the GDP figures were dreadful.

Well, that paradox is less of an issue today:

• In May-July, there were 29.169 million people in employment. This was 69,000 lower than in April-June; normally a fall like this would only happen during a recession.

The current data series goes back to 1992, and there have only been two periods that saw bigger falls: the early 90s recession and the 2008-9 recession.

This should be remarkable, but today was a day for records like this:

Other indicators of labour market weakness are also worrying.

In such a welter of bad news it can be hard to pick out a theme, but one indicator suggests a grim future, and that is what is happening to public sector jobs. Private sector employment is growing, and if it had maintained the level of growth seen last year there might have been some hope that it would compensate for the loss of public sector jobs, as Chart 1 shows.

It now looks very likely the Office for Budget Responsibility’s March forecast (pdf), that unemployment would peak at 8.2 per cent, was over-optimistic; their other unemployment forecast, that the claimant count would peak at 1.54 million, has already been overtaken. Without a plan B, it seems likely all this month’s entries in the record books are due to be replaced by new ones.

13 Responses to “Without a Plan B, the record unemployment figures look set to get worse”