There’s a folk tale in circulation at the moment which, like most folk tales, varies in detail from one storyteller to another but always maintains the same basic, memorable core.

It runs like this: over the last year (or decade, or Labour’s period in office, etc.) the UK saw record jobs growth of X hundred thousand (or X million etc.) but there are still millions of people on welfare because 91% (or four out of five, etc.) of the extra jobs went to foreigners.

Among those retailing variants of this story are Frank Field, Iain Duncan Smith and Fraser Nelson of the Spectator, whose blog post running the changes on the basic narrative was the basis for some over-excited headlines yesterday.

Matt Cavanagh has already written a comprehensive response to Nelson’s piece which painstakingly shows why this is not a sensible way to look at labour market figures. But even he says that Nelson’s figure of 91% of working age employment growth over the last year being accounted for by non-UK nationals is ‘a striking statistic’. This is being a little too charitable.

To see why, consider how easy it is to take the basic structure of the folk tale, plug in some different data and use it to draw roughly opposite conclusions. We are being told migration is somehow associated with benefit receipt, so let’s look at the largest group of long-term benefit claimants, people with disabilities.

Rather than dividing the UK working age population into UK-nationals and non-UK nationals, as in Fraser Nelson’s piece, we have partitioned it into long-term disabled and non-disabled and asked what share of new jobs went to disabled people.

So since the election the disabled have taken all the new jobs, and then some, forcing hundreds of thousands of non-disabled people into benefit dependency. At least that’s what it looks like if you choose to cut the data this way.

But as this exercise shows all to clearly, this is not a good way to cut data.

Add to this that the time ranges we have used mean the economic downturn is distorting the picture and it’s easy to see how we have generated an utterly monstrous factoid out of perfectly innocent labour market data: there just hasn’t been that much employment growth since 2009/10, so it’s not hard for the disabled, or migrants for that matter, to overwhelm the growth figures.

So showing that some group or other is taking all the jobs isn’t difficult if you partition the population the right way and choose the right time frame. The question raised by this piece of pseudo- analysis is why we should take the assertion that non-UK nationals are taking 91% of employment growth any more seriously than the assertion that disabled people are taking 218%.

The latter figure is considerably more statistically robust than the former, but that doesn’t mean it’s telling us anything useful, or indeed anything at all. What these assertions have in common is that they aren’t even wrong, just silly.

However even this piece of silliness draws attention to the other flaw in the migration/benefits folk tale. We seem to have a lot more disabled people in employment, and this isn’t just because there are more disabled people. In fact, disability employment is one of the unsung positive developments in the UK labour market over the last 13 years.

Graph 1 below shows the trends, which are mirrored in falling rates of receipt for incapacity benefit, and growing numbers of Disability Living Allowance recipients who are not claiming out-of-work benefits, up by 71% since 2002. The group which has for a long time accounted for the largest share of long-term benefit receipt has seen its economic activity rate rise by 9 percentage points since 1998. 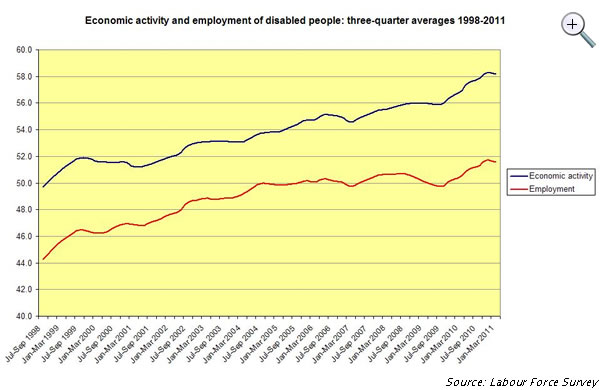 The next biggest group, lone parents, saw very similar increases in employment. Don’t expect to hear these facts cited by those who want to promote the myth that employment growth did not benefit UK citizens under the last government.

138 Responses to “How the disabled took all the jobs”