Bond yields in the UK fell to record lows during August and the chancellor has been keen to present this as an endorsement of his decision to eliminate the UK’s structural deficit over the next four years. This is a completely wrong interpretation.

True, the UK finds itself in the group of countries where yields are at very low levels, whereas the likes of Greece and Portugal have much higher yields. But that was always likely to be the case as long as the government adopted a credible medium-term deficit reduction plan. The US, which is taking a much more circuitous route to agreeing a similar plan, and saw its credit rating cut as a result, has even lower yields.

Equity markets fell sharply in August and sterling did not make any gains against other major currencies. This combination of moves in financial markets suggests investors are concerned about future growth and worried the chancellor has no plan to avert any impending ‘double dip’.

The latest data releases for the UK economy have been almost unremittingly negative. The only bright spots in August were news that employment is still increasing – albeit at a slower pace than earlier in the year – and a surprisingly upbeat industrial survey from the CBI.

These have to be offset against a welter of other evidence that suggests economic growth has ground to a halt. In particular, retail sales volumes have been flat for the last year and growth in manufacturing, which was well above its long-term trend for much of 2010, has fallen back sharply and may have gone into reverse.

The short-term outlook is gloomy. Consumer confidence has dropped as households struggle to cope with higher inflation and increased taxes at a time when wage growth remains modest and unemployment is going up, and it will be further hit when gas and electricity prices increase sharply in coming months. Meanwhile, business confidence – the best short-term leading indicator of output growth – has declined, particularly in the manufacturing sector.

The combination of weaker demand at home and falling external orders (the result of turmoil in the eurozone and poor demand in the United States) make it possible manufacturing will experience a ‘double dip’.

As a result of the deteriorating outlook, the two members of the Monetary Policy Committee who were calling for an increase in interest rates no longer believe such a move to be appropriate and the MPC is considering the possibility of another round of quantitative easing. The chancellor, though, stubbornly continues to rule out any change in fiscal policy.

1. GDP increased by 0.2% in the second quarter: The second estimate of real GDP was unchanged from the preliminary data, showing an increase of just 0.2% on the previous quarter and 0.7% over the last year. Growth was driven by 0.5% increases in the service and construction industries, while production decreased 1.6%. There were some special factors – the Japanese tsunami and the extra bank holiday for the royal wedding – and the ONS thinks these could have taken up to 0.5% off growth. If so, there will be a rebound in the third quarter.

Most forecasters now expect growth for 2011 to fall between 1 and 1.5%, and there have been downward revisions to estimates for 2012 too, with the consensus now going for 2.0% growth.

2. Retail sales volumes are flat: The volume of retail sales was up 0.2% in July but was unchanged from July 2010. Sales values have increased by 4.3% over the last twelve months, despite average wage increases of only 2 to 2.5%. Households are finding the means to increase their spending in nominal terms at a reasonably healthy (but perhaps unsustainable) pace but higher inflation means they get no more in volume terms.

3. Consumer confidence is very low: Consumer confidence fell for the third consecutive month in August and is back to its lowest level since April. In the latest month there was a small improvement in people’s assessment of their own financial situation but a fall in confidence about the general economic situation.

4. Business confidence fell again: Although the latest monthly survey of manufacturing from the CBI suggested orders and output expectations were holding up, a raft of other business surveys showed a deteriorating outlook.

The CBI’s own survey of the service sector showed output falling at its fastest pace since November 2009; the ICEAW/Grant Thornton Business Confidence Monitor is at its lowest level since the third quarter of 2009 when the economy was still in recession; and BDO described confidence as plummeting. The most closely watched survey – of that purchasing managers – suggested manufacturing output shrank in August, when there was also a big drop in export orders, while the service sector activity index experienced its joint second biggest decline.

5. Manufacturing output is expanding at a slower pace: Manufacturing output decreased by 0.4% in June, confirming growth in the sector has lost all its upward momentum in recent months. The annual rate of increase remained at 2.1% – the lowest annual increase since March 2010. The slowdown is broad-based, not just due to the problems of one or two sub-sectors within manufacturing.

6. Employment increasing: Employment remains the bright spot in the economy. It increased by 25,000 over the three months to April-June 2011 and by 251,000 over the last year. However, the pace of increase has declined over the last four quarters and employment is still over 300,000 lower than at its pre-recession peak.

There are now 1.26 million people working part-time because they cannot find a full-time job – the highest number since records began in 1992. This is 83,000 higher than three months ago, more than accounting for the increase in employment over the same period.

7. Unemployment is increasing too: The Labour Force Survey (LFS) shows a 38,000 increase in unemployment between January-March and April-June. The total number looking for work is now 2.49 million, close to its recent high. The claimant count measure has increased for five consecutive months and the trend has been for bigger decreases each month, culminating in July’s 37,100 rise. 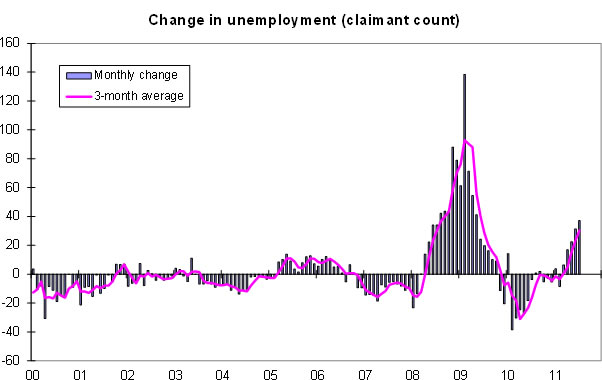 8. Price inflation remains above 4%: Consumer price inflation was 4.4% in July, up from 4.2% in the previous month (retail price inflation was unchanged at 5.0%). Inflation has now been more than 1% above its target rate for 19 consecutive months. In the short-term, it will go even higher when gas and electricity prices rise. Most forecasters, including the Bank of England, expect a peak close to 5%.

9. Wages fail to keep up with prices: Average earnings – both total pay and regular pay – are increasing at an annual rate well below price inflation. This is squeezing households’ spending power – the worst such squeeze since the 1920s. Over the last year, regular pay is up 2.2% and total pay 2.6%.

After allowing for the one-off £3.5 billion of tax revenues received in April 2010 from the Bank Payroll Tax, borrowing is even further below last year’s path. 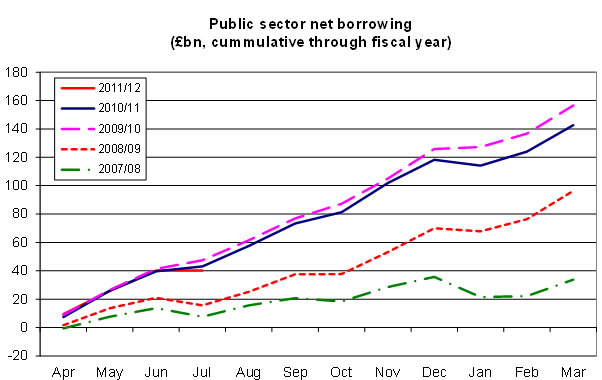 12. Government bond yields were lower: The 10-year UK government bond yield fell to a record low in August – at one point reaching 2.5%. The chancellor has claimed this is a vote of confidence in his deficit reduction plan. It is not. It is a sign that financial markets are extremely worried about the outlook for economic growth in the UK and do not expect the Monetary Policy Committee to increase interest rates for quite some time. 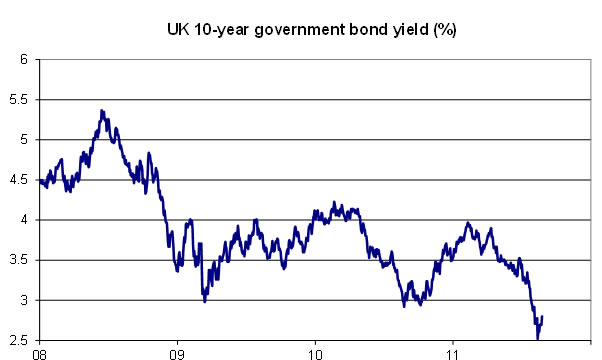 13. Sterling was little changed: Sterling’s value against a basket of overseas currencies fell slightly in August. It was down against both the US dollar and the euro.