A new business survey conducted by Survation for Unite the Union explores the full scale of the industrial fallout if the Bombardier decision is not reversed. 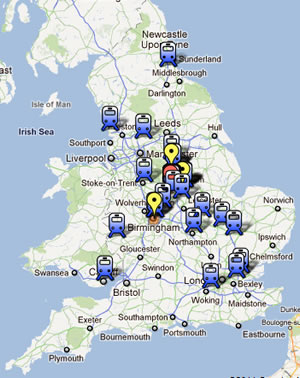 The government decision to award Siemens preferred bidder status for the Thameslink train manufacturing contract has already caused a great deal of consternation. Last month we highlighted the potential political consequences to the government’s stance on the Conservative party in Derbyshire.

Today a new business survey conducted by Survation for Unite the Union explores the full scale of the industrial fallout if this decision is not reversed. Survation’s 125 interviews with managing directors across the Bombardier supply chain reveals the substantial harm that is about to take place to an important strand of UK manufacturing.

The striking diagram of supplier locations charts the size and scale of the existing industrial ecosystem around Bombardier. This is far from an issue of concern confined to Derby and the East Midlands. Businesses and workers in local economies and communities across England and Wales will feel some form of impact.

The scale of job loss is significant. Two in five suppliers (41%) have already or will expect to experience job losses as a result of the Government’s decision. Our analysis of the survey data suggests that there could be between 3,000 and 3,500 jobs losses in the supply chain alone – more than double those lost directly at Bombardier itself.

These findings demonstrate the need for the government to take urgent action. Of those expecting job losses, 74% expect them within the next six months. It had been previously suggested by the government and Conservative MP Heather Wheeler that the Bombardier supply chain would in fact benefit from the award of the contract to Siemens.

Yet today’s findings reveal fewer than one per cent of the firms surveyed believe the awarding of the Thameslink contract to Siemens will have a positive impact overall for their business.

Instead the decision will lead to dire consequences for many suppliers. One in three managing directors (32%) believe it will have a ‘substantially negative impact’ on their firm’s order book. Some suppliers reported in confidence that their entire business hangs in the balance and will fold unless the decision is reversed.

There is a very real cost to the Exchequer an excess of 4,000 existing manufacturing jobs are lost from the economy.

It is worth Treasury and Department of Business, Innovation and Skills ministers reflecting on this report, appreciating the nature of this supply chain and accepting how their decision will negatively impact on Small and Medium Enterprises in particular.

The survey showed that small and medium size enterprises are much more represented than larger companies in the highest category for anticipated job losses (20-50 job losses). The important ‘Brighter Future’ pamphlet published this week  reminds us that SMEs provide 60% of the UK’s private sector workforce. It may seem peculiar that the very part of industry needed to grow right now is the one that stands to hit hard by the initial Thameslink decision.

Within industry there is also a growing sense that the coalition is much more politically fascinated by overseas large multinationals such as Siemens than firms such as Derby’s Bombardier and the smaller UK firms they work with.

An under-reported poll from ComRes last week revealed 61% of the public believe the Government ‘understands the concerns of banks & big business’ but only 23% say the same about understanding ‘small firms & entrepreneurs’. That should worry George Osborne, who previously called for “a Britain carried aloft by a march of the makers”.

Put together, there is an acute industrial and political challenge for the government. Tomorrow Ministers will hear further evidence for the detailed reasons why they should revise their Thameslink decision.

Most importantly they will hear from international procurement authority Professor Chris Bovis on the practicalities of how they can do this. It’s currently not too late for ministers to pull back from the brink, but time is running out.