The latest ‘too big to fail’ figures help illustrate just how desperately the Independent Banking Commission needs to show resolve in dealing with the banks. 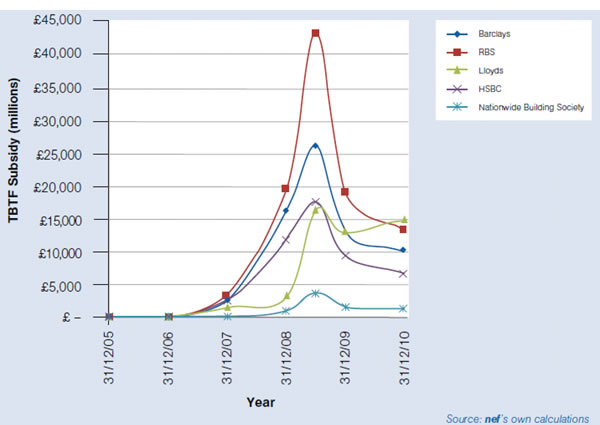 Lydia Prieg is a researcher at the new economics foundation (nef)

This subsidy arises because large banks are able to borrow at lower interest rates than they would be able to if they operated in a truly free market – a result of the implicit understanding in the market that the government will step in and bail out investors if a large bank defaults on its debt payments.

The report uses methodology developed by the Bank of England, and, for the first time, as Graph 1 shows, quantifies the TBTF subsidy for each individual bank.

In addition to unfairly inflating banks’ profits, these TBTF subsidies give large banks a huge competitive advantage (£) over their smaller counterparts. Moreover, even ignoring the financial value of this subsidy, while the market suspects the government will ultimately intervene if a bank gets into trouble, risks will not be fully shouldered by the risk-takers.

This undermines market discipline (£) and incentivises banks to engage in risky practices.

Finally, it is also important to recognise that while the TBTF subsidy does not involve the direct transfer of funds from the Treasury to the banks, it may involve an indirect transfer, as the interest rate at which investors will lend to the government may increase to reflect the additional risk the government is taking on board in effectively underwriting banks’ balance sheets.

This upcoming Monday, the Independent Commission on Banking (ICB), otherwise known as the ‘Vickers Commission’, will release its final report advising the government on how issues such as the TBTF problem should be addressed.

So next time you hear the big banks cry foul of needless government interference, remember that government interference is worth billions to the industry. As long as the government  offers such a subsidy, it is only fair that it set the banks the rules we need to avoid a repeat of the banking crisis, and insist that bankers contribute their fair share to society.