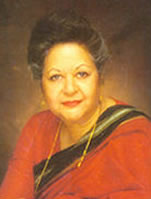 Former Tory peer Baroness Flather used the opportunity of the welfare reform bill’s second reading in the House of Lords to attack Pakistani and Bangladeshi families for having too many children.

Specifically, she lays the charge that they do so to claim more benefits.

The Daily Mail faithfully reports that she told the Lords:

“The minority communities in this country, particularly the Pakistanis and the Bangladeshis, have a very large number of children and the attraction is the large number of benefits that follow the child.

According to the BBC, she went on to compare Pakistani and Bangladeshi families unfavourably with Indians and Jews:

“Indians have fallen into the pattern here. They do not have large families because they are like the Jews of old. They want their children to be educated.

“This is the other problem – there is no emphasis on education in the Pakistani and Bangladeshi families.”

Not only does this ‘slice ’em and dice ’em’ analysis leave a bad taste in the mouth, but it also only has a loose relationship with any actually evidence.

First, although birthrates are higher among Bangladeshi and Pakistani communities, they are not so much higher as to assert there is a general culture of very large families.

As quoted in the Runnymede Trust’s “The future ageing of the ethnic minority population of England and Wales” report, research shows that the birthrate for Bangladeshi and Pakistani communities has fallen dramatically over recent decades, as Chart 15 shows. 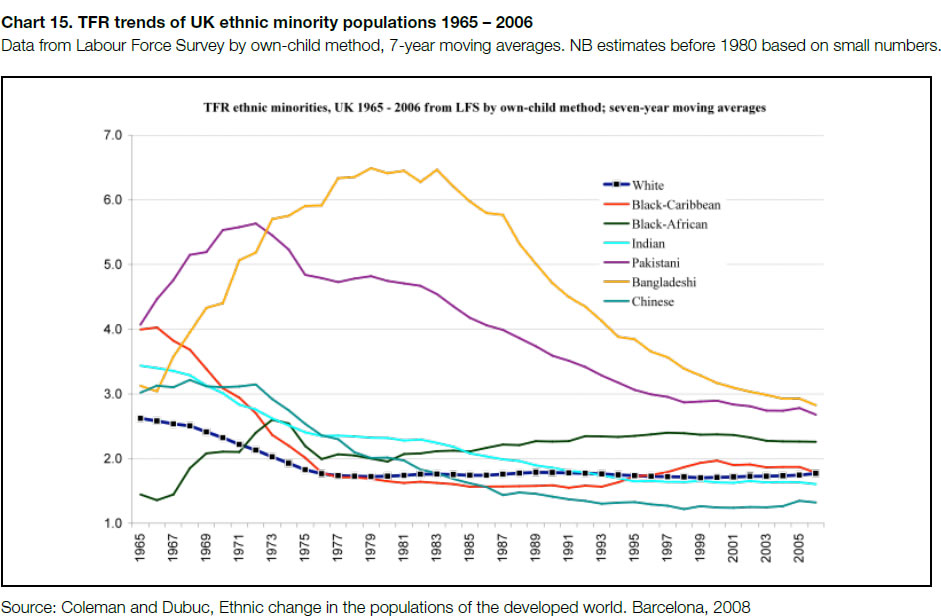 Although birthrates among Pakistani and Bangladeshi families are still high enough to be of interest to the social scientist – almost 50 per cent higher than the Indian rate – by 2006 they were still both below 3.

This is far too close to the replacement rate of 2.1 – or the mythical 2.4 children that was deemed to be the ‘normal family’ for most of the immediate post-war period, to be described as some epidemic of large families among these communities.

According to the Flather thesis, one would expect the birthrates of these communities to rise. As they became more established in the country, they would get to know the benefits system better and therefore how to exploit it.

Yet the rate halved for Bangladeshi families over 25 years.

However, it is fair to say that birthrates are higher among these communities, and so it is an interesting question as to why. The idea that it is to chase benefits appears bizarre since according to 2006 research from the Joseph Rowntree Foundation the UK tax and benefit system is slanted towards smaller families.

What seems more likely is that the contributing factors are level of income and female education – international research has shown that as both rise, birth rates fall. And while 34 per cent of Indian adults have undertaken higher education (See p.271 of this government report) compared to 28 per cent of white British, 18 per cent of Pakistanis have and 14 per cent of Bangladeshis have.

Meanwhile, although median household wealth for Indian and White British households is more than £200,000, it is only £97,000 for Pakistani and £15,000 for Bangladeshi households.

There is an argument that communities where a large proportion of mothers were born in that communities country-of-origin carry a higher birth rate, but since birth rates are have fallen in both Pakistan (2.5) and Bangladesh (2.3), this seems to be a decreasing factor.