The Taxpayers’ Alliance’s lack of research beggars belief; it couldn’t be that the TPA are just a bunch of ideological zealots? 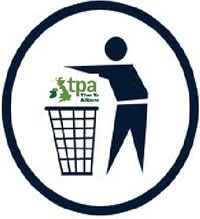 It was a classic Taxpayers’ Alliance story. The headline “Binmen get iPads to save on paper” ran across this morning’s Metro front page. The article detailed how supposedly-profiligate Bury Council was spending £9,000 on the Apple tablets so bin lorries could log details of collections.

The TPA weighed in:

“It beggars belief that a council making huge savings can find this money to splash out on iPads.

“Residents want bin services that are reliable and efficient, not council staff monitoring what they’re throwing out.”

The Daily Mail even lifted the “beggars belief” line for its own headline, topping off a fine day’s work for the TPA.

What actually beggars belief is the so-called alliance failed to do its research properly before commenting on something it knew very little about.

The initiative will actually save Bury Council money, the iPads just being a new form of efficiency-through-mechanisation. A spokesman for the council told Left Foot Forward the changes have the capacity to save the council more than £150,000 per year.

“This system should ensure that the number of missed collections is reduced to an absolute minimum, because any problems are reported in immediately to our Customer Contact Centre [rather than afterwards, meaning that houses would need to be revisited]. We collect from 83,000 houses each week.

“In the last financial year, we received 4,228 reports of missed bins – we estimate that it would cost £40 to revisit each house, equivalent to nearly £170,000 a year, so this new system should make hefty savings.

“Bury Council is consistently ranked as one of the country’s most cost-effective and efficient councils, and this initiative has been developed in-house in order to keep down costs.”

Honestly, one might jump to the conclusion that the TPA were not really interested in value for money for taxpayers, but on an ideological adventure to undermine public services and the public sector – in this case Bury Council’s directly-provided bin collection services.