The most promising area for cross-party consensus, is what to do about the small minority of chaotic families in which children do grow up with little sense of right and wrong, 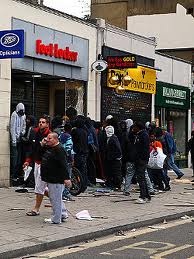 This week has seen the start of a national post-mortem on the causes of the riots. The unseemly spat between the Government and the police – over whether the Met needs a US ‘super cop’ to teach them how to tackle gangs – is missing the point.

Meanwhile, too many in the media have already drawn their conclusions before the outcome of any national inquest, unsurprisingly in favour of their previous editorial lines.

Some things do seem clear. In the first 48 hours, an inadequate police response allowed the riots and looting to spread, and failed to deter opportunists from joining in.

But the police have understood the lessons of this, and from Tuesday night onwards they implemented them.

The Government’s big idea for police reform, elected commissioners, is a red herring here (the Met is already very close to that model) as are foreign policing czars.

The value of large numbers of police on the streets should however lead to a rethink on the planned police cuts, in particular in those city forces which faced the brunt of the riots, which have to deal with higher crime rates anyway.

These are also precisely the forces which – as a recent HMIC report proved – will on current plans have to cut deepest into front line police numbers.

The most promising area for cross-party consensus, is what to do about the small minority of chaotic families in which children do grow up with little sense of right and wrong, and who may have accounted for a disproportionate share of the most violent and unrepentant looters.

Precisely because the numbers here are so small, we shouldn’t pretend they will be effectively targeted by reforms to universal services – either flagship Conservative reforms like welfare or school discipline, or flagship Labour policies like Sure Start.

The good news is that we have an increasingly good grasp of how to identify the kinds of families whose children are most likely to grow up with serious behavioural problems, or who are showing the early signs of doing so, and we also know more about how to intervene effectively: with the smaller-scale, one-to-one support offered by programmes like Family Nurse Partnerships and Family Intervention Projects, and similar programmes aimed at children excluded from school.

Ed Miliband referenced these programmes in his speech today, and David Cameron, in his speech, announced a new target of”turning around the lives of the 120,000 most troubled families” by 2015.

The Conservatives should acknowledge the role that Labour played in developing these programmes, and Labour should agree with the Conservatives that they can be run as well or better by the third sector – but we need national coverage, and whoever runs them, they need proper funding.

What about the deeper causes? Ed Miliband was right yesterday when he rebuked “those on the left who dismiss arguments about culture”. But rather than attacking rap music or lamenting the “slow motion collapse” of morality, a more practical and focused response would be to look closely at what we now understand about the effects of consumerist attitudes.

Back in 2006, an IPPR report called ‘Freedom’s Orphans’ found that the negative effects of these attitudes are being felt younger, and most acutely on kids from poor backgrounds. We should think again about how we can restrict commercial targeting of children – but clearly there are also wider questions here for the whole of society to consider.

Miliband was also right to say that it is not just about values and culture – it is also about poverty and opportunity. David Cameron was happy to take the same view in 2006, when his political priority was to ‘detoxify’ the Conservative brand, but this week he has reverted to Conservative type, presenting people with a false choice between these two explanations, rather than trying to understand the relations between them.

The Times did the same on Saturday when they splashed on some IPPR analysis, taken out of context, to support their theory that “single parent families and broken homes” were to blame.

We tried to explain to The Times that child poverty rates in local authorities where the riots flared are stubbornly high, and that parents raising children in poverty find it harder to spend enough time with their children.

IPPR also takes the view that while youth unemployment cannot be an excuse for looting, we cannot afford to ignore the fact that at around 20%, it is at a historically high level, and higher still in areas where the riots took place.

Youth unemployment is not a new problem, but after significant falls in the late 1990s and early 2000s, long-term youth unemployment has been steadily rising – and so has the proportion who remain out of work for a year or more.

Long spells of unemployment can have a particularly scarring effect on young people, reducing their lifetime job prospects and earning potential, and damaging their health and wellbeing.

Against the scale of the problem, the range of apprenticeship and work experience programmes being offered by the Government looks increasingly inadequate.

Simply blaming economic disadvantage is an insult to the majority of young people who strive to overcome the same disadvantage without resorting to crime.

But the fact remains that across different eras and different countries, the number of unemployed young men is a reliable driver of crime and disorder.

Ministers looking for something to say as they tour the blighted areas should consider the powerful, uniting message it would send if they announced a guaranteed job at the minimum wage for all young people who have been out of work for a year.