It is now widely understood that the rioting was in part driven by communications using social networking services. Police must act. 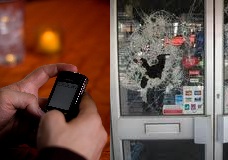 It is now widely understood that the rioting – that caused by nihilistic looting as well as that by organised criminal gangs – was in part driven by communications using social networking services such as Twitter and BlackBerry Messenger (BBM).

It has been clear for months that social media escalate ‘spontaneous’ public events for good or for ill – from the protests in the Arab capitals to the actions of UK Uncut, public pressure to shut the News of The World to the riots and the volunteer clean-up efforts.

We do not need to give a moral evaluation to the events on that list to see that there is a pattern here: Social media enables events to snowball and build to levels which would have previously been impossible. And while it can be used for tremendous good, it may have only been a matter of time until it was used for more sinister ends.

Obviously the ultimate cause of the riots is the irresponsibility and the thuggery of the perpetrators. But ignoring the social media aspect of this will allow things to continue to run out of control.

There are questions here for programmers and the police. For the programmers, there are concerns about BBM in particular, for which general public access is more difficult as participation requires a PIN number, and for which tracing messages is difficult.

Police should be in direct talks with the developers Research in Motion on how to ensure that the law enforcement authorities have access to it, and can trace those sending messages more easily.

The police do have an advantage here. The structure of social media pulls users towards being less anonymous, not more – it should make it easier to identify those planning, and who have carried out, criminal acts.

Technology moves very fast, and it is not surprising that the authorities may be taking time to adjust. But they have to give the time and thought to engage with social media – otherwise we will all pay the cost.