Fuel poverty is now a middle class issue. Until government takes on the big six energy companies or deals with building regulations, it will not be dealt with. 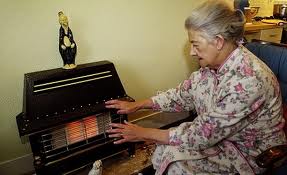 One in every four households in the UK is now classed as fuel poor. A fuel-poor household is defined in the UK as one where the expenditure required to maintain adequate warmth exceeds 10% of household income.

It is a measure of the number of households needing to make impossible decisions on expenditure just to meet their basic human needs.

There is, however, no pan-European definition of fuel poverty. In other countries fuel poverty might fall within general poverty-alleviation programmes, or it may simply not be recognised as a major problem.

Cross-country comparisons therefore need to employ indicators of fuel poverty, such as the winter variation in mortality levels or the number of people in arrears with their utility bill payments.

The truth is that whilst Labour can claim some success by acting to increase household income, the Labour government failed to take significant action to control the cost of fuel per Kw/h charged by the big six utility companies.

If we look at the figures over an extended period, what becomes evident is that the net effect of Labour’s winter payments strategy was only to hold excess winter deaths broadly static when otherwise they might have increased.

Winter mortality in other European countries reveals some surprising trends. The countries with the highest winter death rate are Portugal and Spain. Whilst counter-intuitive, this can be explained by the low levels of home-insulation in countries where housing is not designed primarily to protect against cold weather and where there is a substantial element of rural poverty.

When a cold winter does strike such countries are singularly ill-prepared. It is perhaps more instructive therefore to compare the UK with other affluent countries of northern Europe.

What emerges clearly from such comparisons is that there is a strong correlation between thermal standards in housing and excess winter deaths. 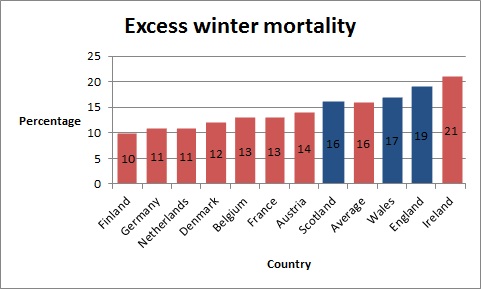 That excess winter mortality is almost twice as high in England as in Finland or Germany cannot directly be attributed to weather. However, precisely because of its cold climate, Finland already has very demanding thermal requirements.

In the 2004 version of the Finnish building regulations, thermal requirements were increased by 30% and heat recovery from exhaust air became mandatory.

If the owner does not want to make use of heat recovery, then the amount of energy that would result from recovered air has to be compensated for by improving the thermal insulation of the building.

The Coalition government by contrast has just introduced its Warm Home Discount scheme where energy suppliers will be obliged to give rebates of £250million in 2011-12 rising to £310million in 2014-15 to vulnerable customers.

It is astonishing that the UK continues to focus on financial solutions to what is essentially a technical problem of building standards.

The coalition government’s Green Deal adopts essentially the same approach; turning utility companies into financial service providers giving loans to householders to install insulation measures that are repaid over time out of the savings on their domestic bills.

Unfortunately the projected interest rates of between 9% and 11% make these deals very unattractive compared with what is already available to householders through their current mortgage supplier.

Labour’s Warm Front Scheme (now scrapped by the Coalition) was a step in the right direction as this gave vulnerable pensioners grants for insulation and heating improvements where a vulnerable household fell below level D on the EPC (Energy Performance Certificates) scale and used the SAP (Standard Assessment Procedure) to determine what insulation and heating improvements were required. Even this though, failed to set clear absolute standards as to what levels of insulation and energy efficiency must be achieved.

Government has also failed to control the soaring costs of energy charged by the ‘Big Six’ utility companies. Household bills have increased on average by 71% in just 5 years.

The latest attempts by government to reform the electricity market, once again let these companies off the hook by failing to break up the vertical integration of the companies.

Vertical integration allows a utility company to generate the electricity under one arm of the company which it sells through an intermediary (often offshore) which they also own, and then on-sells to another arm of the corporation who supplies it to us as the consumer.

The result is a total lack of transparency in the true cost of electricity. All of the Big Six operate similar structures which prevents true competition and stops new entrants coming into the market.

The latest research by uSwitch shows that fuel poverty is now spreading into the more affluent groups of society and can no longer be confined to vulnerable pensioners and single working-class parents.

Indeed, if fuel poverty were re-defined to be calculated after housing costs, fuel poverty levels actually rise to a shocking 9 million or a third (33%) of all households.

This redefinition has been proposed by Consumer Focus, NEA, FOE, ACE and Age UK in their joint submission to the inquiry on social justice in the low carbon economy, where they say: “remove housing costs from income to give an After Housing Costs measure. The government’s Before Housing Costs measure does not allow like-for-like comparison of fuel poverty across tenures and different geographic areas”.

The uSwitch research makes disturbing reading: even on the current definition 36% of working class households are in fuel poverty. But so too are 15% of middle class households.

The clear message is this: “Fuel Poverty is now a middle class issue.” 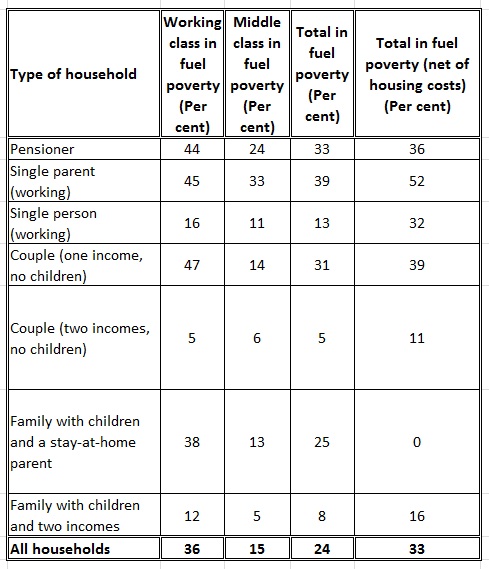 Unfortunately governments have tended to focus on the first and a lot less on the other two.

An effective fuel poverty strategy will reverse this. It will start with:

Until government moves decisively along these lines, we will continue to see our fellow citizens literally dying of cold.