The ONS Quarterly Migration Report yesterday gave rise to media headlines about a big rise in immigration - even though immigration had hardly risen at all. 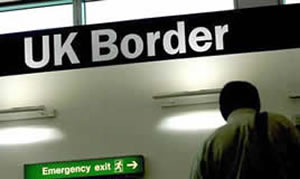 The Office for National Statistics (ONS) Quarterly Migration Report (pdf) yesterday gave rise to media headlines about a big rise in immigration – even though immigration had hardly risen at all.

What the ONS reported was a 21% rise in net migration – caused primarily not by more immigrants to Britain but by fewer emigrants from it. This nuance was not a detail buried in the report, but was clearly flagged in the very first two bullet points of the ONS summary:

A good slice of the immigrants recorded in the figures are British nationals too. The ONS estimate is that 81,000 of the immigrants who arrived in 2010 were British, which was a slightly lower number than the 91,000 estimate for 2009, though the difference is not statistically significant. Supporters of tighter migration policies do not tend to propose any restriction on these immigrants, many of whom are returning to their country of origin.

This complex set of figures made easy headlines more difficult – reflected in reporting which captured these complexities. The BBC produced a nuanced account of the detail of the changes, drawing on analysis from the Migration Observatory’s experts at Oxford University. The ONS numbers are also reported accurately this morning in several newspapers.

But several media outlets instinctively reached yesterday for an “immigration rising” headline, though some did later amend these headlines to reflect the facts that they were seeking to report. Sky News appears to have been first to change a rising immigration headline to “net migration”, as the New Statesman blog noticed, after noting the initial error.

I myself contacted both the Independent and Politics Home. Both, to their credit, responded within half an hour of recieviing an email to say they had corrected headlines so as to refer to “net immigration” or “net migration”.

In both of these cases, accurate reports summarising the ONS data had initially been given inaccurate headlines. Despite correcting one headline on its report yesterday, the Independent does, however, appear to have made a similar mistake again in its headline this morning, again on an accurate report.

The Evening Standard’s reporting of the figures was considerably more confused than that. Both the online headline “20% increase in immigrants coming to the UK” and the print edition’s page 2 news story “Number of immigrants moving to the UK rises 21%” got the facts wrong.

The Standard made this mistake despite Home Affairs Editor Martin Bentham including the real story later in his news report. Having opened “the number of people moving to Britain jumped by 21 per cent last year in a fresh blow to the government’s efforts to curb immigration”, the news story directly contradicted its own headline claim by the seventh paragraph of the same report, which stated:

“Despite the large numbers of arrivals, inflows into the country remained stable, however, and the main reason for the large increase in net migration was another decline in the numbers departing from Britain.”

An email to flag up the error has, so far, generated only an automated message promising it will be read.

There is no particular reason to think the Standard’s mistake was driven by an anti-immigration editorial agenda. Indeed, the newspaper’s leader on the subject yesterday, noting the difficulties for the government of missing its target, repeated the paper’s concern that the immigration cap will damage London’s economy.

“One of ministers’ main policies for achieving their target is a cap on non-EU migrants coming for work, which is set at 20,700 this year. This is ineffective, and it disadvantages London which depends on immigrants in jobs from office cleaning to fund management. The Mayor argued against the cap, and concessions were made.

“But a far better way to reduce numbers, without the same impact on employers, would be to make sure that those here temporarily, notably to study, leave when their visas run out.”

More aggressive reporting alleging the figures show a 20% rise in the number of immigrants can be found elsewhere, with this morning’s Daily Express dedicating a front-page headline to misreporting the figures, with its banner headline falsely claiming:

…and its report muddling up how many immigrants the Express thinks there were in 2010.

“The number of foreigners coming into Britain soared by a massive 21 per cent last year… Official figures yesterday showed the number of immigrants soared to 239,000 – up from 198,000 in 2009. A legacy of Labour’s open-door policy, it was the second highest annual figure since 1991.

Perversely, given the Express’s anti-immigration editorial line, it misreports the 20% involved giving a number of immigrants which is only half the real total, before contradicting this with the true number in the following paragraph of political correspondent Martyn Brown’s report.

Of course, immigration is an important subject of public and media debate and should remain so. Several newspapers are vocal in calling for tighter restrictions on immigration, now challenging the government to meet its own target. But it should be possible for media outlets and advocates with very different opinions about immigration policy to report the migration facts accurately.

The Daily Mail also got the facts wrong online yesterday, claiming 20% more immigrants came to Britain last year in the headline and text of a report by Anna Edwards, headlined:

But the Mail took more care and managed to accurately report the numbers in its page two news report by social affairs correspondent Steve Doughty today. The print headline is “575,000 come to UK in a year despite vow to curb immigration” – though the online edition continues to use the “soared by 20%” headline from the earlier report.

The print report also showed how the newspaper could maintain an assertive editorial agenda challenging immigration without misreporting the numbers themselves:

“Migration added 239,000 to Britain’s population last year – because immigration remained sky-high while Britons can no longer afford to leave the country to live abroad.”

Spectator editor Fraser Nelson was also across what the figures showed; though he is an advocate of tighter immigration, he found in them cause for patriotic celebration:

“This is a compliment to Cameron: the most sincere vote people can make is with their feet. And in our globalised world countries have to compete for people. Britain is as attractive as ever it was to immigrants, and more natives are staying put.”

That perspective contrasts with the Mail, which has deduced that:

“Fewer Britons are emigrating because falling incomes and pensions means hundreds of thousands have abandoned the dream of retirement of a new life in France, Spain, Australia or the US.”

That explanation would seem to overstate the scale of change in the 2010 figures.

Whatever various hypotheses might be mooted for the fall in emigration – whether the economic troubles of the eurozone or the comparable domestic competitiveness of a weak pound; or perhaps even satisfaction with a change of government, or excited anticipation of the 2012 Olympics – that subject could well prove a good one for further journalistic inquiry.

The Daily Express is willing to offer the Prime Minister more time – for now:

“David Cameron will probably find that most people wish to reserve judgment for now on whether he has any prospect of meeting his key promise about immigration. But if he comes back next year to report that he is further away from his target rather than a lot closer to it he can expect serious trouble.”

But Fraser Nelson argues the government has made a mistake in choosing to target net migration, rather than immigration itself:

“So I’d say Cameron has a snowballs’s [sic] chance in hell of meeting his target. Today’s figures will be the first of many over the next four years making that point.”

35 Responses to “Express and Mail fail the migration stats test”