Anna Hazare hunger strike: we must have confidence India will once more respond to the Gandhian call of satyagraha and listen to the moral force of peaceful protest. 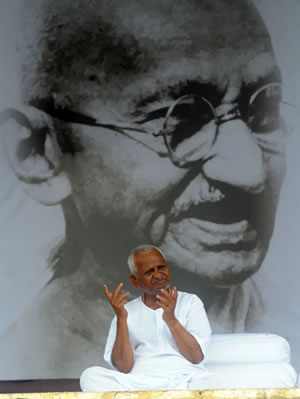 Friends of India around the world breathed a sigh of relief last Friday when the Indian government released the anti-corruption campaigner, Anna Hazare from jail. What a tragic irony it would have been, had this nation – whose very birth came out of the hunger strikes of Mahatma Gandhi – prevented Hazare from resuming his peaceful protest against corruption.

It is not for any other country to interfere in India’s domestic affairs. India’s friends though will know that the direction she chooses over the ‘Lokpal’ bill is one that will in many ways determine her future.

Certainly the enormous swell of public support for Hazare’s cause and the uniting of all the opposition parties in support of a strengthened bill, has given the UPA Central Government a unique political opportunity to pass a bill which will break the back of corruption. This is an opportunity that has never previously existed and one that may not come again for another generation.

Last Monday I attended events to celebrate 64 years of India’s independence. I hoisted the Indian flag at the Anoopam Mission and talked of India’s achievements in becoming a diverse, tolerant and intensely democratic country.

These words seemed slightly less appropriate on Tuesday morning, when Hazare and over 1,200 of his supporters were arrested hours before beginning a long planned and peaceful protest. Late in the day, the police had imposed six conditions on the protest including a time limit and a cap on the amount of people taking part to 500. At least 20,000 people had been expected to attend.

“Police met Anna Hazare this morning and he told them that he intended to defy the prohibitory orders. At that time, police came to a conclusion that he will commit a cognisable offence.

“They invoked sections 107 and 151 of CrPC which calls for preventive measures.”

As we speak, Hazare is on day 10 of his 15 day protest and is meeting government representatives as well as a cross party committee, each day, to negotiate changes to the bill. He has laid out ten conditions he wants to see included in the bill, and has said he will continue to fast until they are all met.

“Until now, the government’s intentions are not good. So I have decided until my last breath, until the government gives in to this issue, I will not turn back. I don’t care even if I die.”

Hazare has refused to be hospitalised, despite repeated calls from the team of doctors who constantly monitor his vital signs, amid mounting concerns over his health. The 74 year old has dropped from 72kg to 66.2kg during the ten days.

Hazare’s high regard across India followed a week-long hunger strike in April against corruption at every level of Indian society. The UPA Government subsequently invited him and other leading civil society campaigners to join a drafting committee for a new anti-graft or ‘Lokpal’ bill, consisting of equal numbers of politicians and anti-corruption campaigners.

The committee members clashed on several key issues, including the scope of the new body, whether it should apply to the prime minister, Cabinet and senior judiciary and who should sit on the committee. The drafting committee was unable to reach a compromise and produced two separate versions of the bill, with the weaker version of the bill favoured by the politicians eventually being chosen to be put before Parliament, provoking Hazare to resume his protests.

Prime minister Manmohan Singh has called an all-party meeting to discuss the proposed measures as the government seeks to bring an end to the hunger strike and protests which have sprung up in support.

Finance minister Pranab Mukherjee has been appointed as the chief government negotiator and has been meeting each day with key members of Hazare’s team. At the moment however, the government still seems unwilling to compromise with Hazare over several of his demands including the creation of a citizen’s charter, inclusion of the lower bureaucracy within the bills remit and extending the bill to State level.

The 2010 Corruption Perception Index gave India a score of 3.3 on a scale from 10 (highly clean) to 0 (highly corrupt), with a recent KPMG report stating:

“High level corruption and scams are now threatening to derail the country’s credibility and its economic boom.”

As I wrote in June on Left Foot Forward, corruption is a huge problem for India. The bill that the negotiations produce will have a huge impact, not only on the daily life of all Indians, but also on the many thousands of British companies that trade, invest and operate there.

All of India’s friends will hope that negotiations are able to reach a conclusion before Anna Hazare’s situation deteriorates. More than this we must have confidence India will once more respond to the Gandhian call of satyagraha and listen to the moral force of peaceful protest.