Thrice-married Rupert Murdoch, who brought Page Three girls to the UK media and whose newspapers attack international aid, is a papal knight. 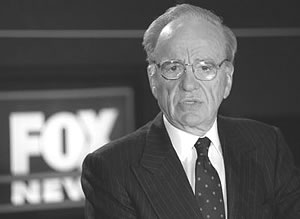 What do the founder of the paralympics; a UN official who saved thousands of refugees; Jimmy Saville; and Rupert Murdoch have in common? Well, Eunice Kennedy Shriver, Francis Martin O’Donnell, the veteran DJ and the media moghul are all Members of the Order of St Gregory the Great, an honour conferred by the Pope.

The poisonous publisher became a Knight Commander of St. Gregory in 1998. The Indepedent reported at the time (via Bartholomew’s Notes on Religion):

“The Roman Catholic church is receiving complaints from worshippers following news that Rupert Murdoch has been awarded a papal knighthood from Pope John Paul II.

“Senior Catholics are said to have been “mystified and astonished” when they heard that the purveyor of newspaper sex, scandal and nudity was made a Knight Commander of St Gregory at a ceremony in Los Angeles last month.

“News of the award was kept out of Mr Murdoch’s British titles – the Sun, the Times, the Sunday Times and the News of the World – at his request, although it is provoking outrage in the religious media and in Ireland, where many Catholics have reacted with anger that Mr Murdoch, who is not a Catholic, appears to have been honoured purely for donating large sums of money to the church”

Oddly enough, the following year he donated $10 million to build a Catholic cathedral in Los Angeles. There was upset in the Church at the time, and now Catholics are calling for Murdoch to be stripped of the title.

On an article on the Catholic Herald titled ‘Debate: should Rupert Murdoch’s papal knighthood be rescinded?’, comments included:

“Murdoch should certainly be stripped of his knighthood. He should never in the first place have been awarded it. Not only does his latest behaviour and that of his company and his son disqualify him, he has been an enemy of anything that passes for decency for years.” – Harper

“He owns an American cable news service called FOX that has more-than-lost its “moral bearings,” especially in the way it has dehumanized Barack Obama not only as a human person but president of the United States.” – Jjkscw

“Murdoch brought the “Page 3 girls” to this land.  For this demeaning of women as sexual objects alone, no Catholic should be speaking in his defence” – Editor CT

With forces in the Church of England pushing for the organisation to sell its £9 million in BSkyB and News Corp, the financial and personal losses sustained by Murdoch may begin to mount up.