Dave Prentis, the General Secretary of UNISON, on the government’s attacks on public sector pensions - and the damage the savage cuts will bring. 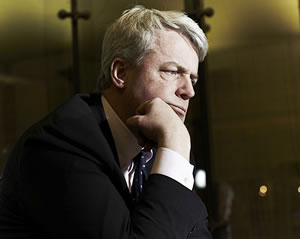 UNISON’s campaign against the government’s plans for public sector workers got an unexpected boost this weekend, when it was revealed health secretary Andrew Lansley had written a five page letter to George Osborne’s Treasury, warning about the dangers of his own government’s proposals.

Even Tory ministers are waking up to how unjust, unreasonable and unworkable their plans are – plans to make public sector workers pay more, work longer and get less when they retire. Mr Lansley helpfully echoed UNISON’s concerns by pointing out the proposals were “inappropriate” and “unrealistic”, and would hit women particularly hard.

From the word go, UNISON has been warning people will leave the schemes if they are forced to pay more in contributions – another Mr that Lansley gave his backing to. Health workers and local government staff already pay between five and eight percent of their salary into their pension. Stuck on a pay freeze and with inflation high, it would be impossible for many to afford more.

The best deal for the taxpayer are decent schemes that allow workers to put some of their wages aside, together with a contribution from their employers – giving them enough money to stay out of poverty in their retirement. The alternative if workers opt out is a whopping means tested benefit for the taxpayer – placing a huge burden on the public purse.

And the taxpayer is already set to pay a heavy price to support those who haven’t saved, or have been locked out of saving for their retirement. Today, UNISON warns of a huge potential benefits bill to support up to 15 million private sector workers who are not in a workplace pension to which their employer contributes. This could mean they are forced to rely on benefit top ups paid for by the taxpayer when they retire – an average bill to the taxpayer of £15,000.

Thanks to our campaigning the facts are starting to cut through the fog of misinformation that has clouded much of the public sector pensions debate. The evidence shows the schemes are affordable and sustainable for the long term – a fact proved decisively by independent experts the Institute for Fiscal Studies (IFS) and the Chartered Institute of Public Finance and Accountancy (CIPFA).

Thanks to a thorough renegotiation in 2008, £2 billion more comes in than goes out of the health scheme each year. This money goes directly to the Treasury coffers – not to pensions, so any contribution rise or cost saving plan is simply a money raising exercise to plug the deficit. And if the cost of the health workers scheme goes up, it will have to be picked up by health workers themselves – the employers’ contribution is already capped.

The local government scheme is in good shape too – it is a funded scheme that is cash rich, and could afford to pay all its liabilities for the next 20 years without one single penny more in contributions. It invests hugely in the economy – and has investments that are worth a whopping 12% of UK GDP – something its critics seem to conveniently forget.

People are waking up to the reality that public sector pensions are far from gold plated. The average pension in local government is around £4,000, for women £2,800 – or £56 a week. In the NHS the average is £7,500 – higher because of doctors and consultants pensions, and for women again about £3,000 – Mr Lansley is right to warn that women will be hit hardest, and many of them are relatively low paid.

Our campaign to get the facts across will keep running throughout the summer as the talks continue.

We are now in scheme-specific negotiations, and whilst we are hoping for the best, we are planning for the worst. If the talks fail, or the ‘offer’ that finally emerges is inadequate, we will ballot 1.2 million of our 1.4 million members for what will be sustained industrial action – a huge undertaking. We know that one day of action will not be enough – a march or a rally won’t cut it – our action will have to be for a longer period of time to get the government to change its damaging course.

Our position in fighting for these pensions is clear – the attacks are based on ideology, not necessity – let’s hope the government falls for the facts, not the fiction, and adds its weight to the campaign for decent pensions for all workers – whether they are in the public or the private sector.

39 Responses to “Osborne’s attacks on pensions are based on ideology, not necessity”