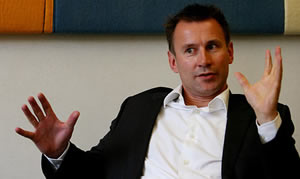 Jeremy Hunt will delay his decision on News Corporation’s takeover bid for BSkyB until September, the Financial Times reports this lunctime.

The culture secretary has delayed his decision, reports say, due to the deluge of submissions this week since the full scale of the News of the World phone hacking scandal emerged – and to head off the uproar that would ensue were the decision to be announced as planned, with Parliament in recess from next week.

The deadline for the submissions is Friday July 8, but the controversy over phone hacking at the News of the World – Mr Murdoch’s Sunday tabloid newspaper – has seen submissions rise from an estimated 60,000 to over 100,000 today.

In a first round of consultation last March, the government received 40,000 responses. Reading each one of those took civil servants and outside lawyers three working weeks.

At the same rate, it would take seven and a half weeks to consider 100,000 submissions, taking the earliest date for an announcement to August 30.

The delay in the verdict will prove politically expedient for Mr Hunt and David Cameron, prime minister, who will be hoping that the furore over hacking subsides over the summer break.

“There will be a delay but it’s not foot dragging because the government has to go through so many submissions,” said one government insider. “This is due process.”

Mr Cameron has insisted that Mr Hunt, acting in a quasi-judicial role, will stick to the law in deliberating on the bid. A government official said on Thursday that the high level of submissions – a precise figure was not available at that time – meant there would be a delay in Mr Hunt’s decision.

Hinting at a delay, earlier this morning in the Lords government spokeswoman Baroness Rawlings said:

“There’s no date at present for the decision. The Secretary of State will not be rushed.”