David Cameron, addressing the Welsh Assembly today, gave hope that the funding formula for Wales could be reformed soon - but the prime minister didn't say when. 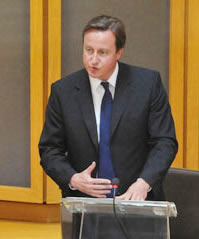 More than two years since the Holtham Commission first warned that Wales is losing out by £300 million a year under the Barnett Formula, and over a year since Gerald Holtham predicted that reform to the system of funding Wales could take 14 years, David Cameron has taken the prospect of reform a step closer today.

As the cabinet today met in Wales on an away day, he used the opportunity of an address to Assembly Members in Cardiff Bay to announce the principles of a commission, similar to that led by Kenneth Calman in Scotland, designed to bring about a cross party consensus on what reforms should look like.

The prime minister told the Senedd:

“Four months ago, Wales held a referendum and the people of Wales spoke decisively. No longer will the Assembly have to ask permission from Westminster to legislate on devolved matters.

“It is clear there is no turning back from devolution, nor should there be. But I believe that along with this new level of power you now hold should come new levels of accountability. So as we promised we will establish a process similar to the Calman Commission in Scotland.

“And whatever the outcome of this process, I want you to know I will always be here to work with you for the good of Wales as part of a strong United Kingdom. I welcome the cooperative approach that first minister Carwyn Jones is taking and look forward to further discussions. We’ve had some today, we’ll have more in the future.

“And for the relationship to continue in a spirit of mutual respect.”

The pledge came just days after what first minister Carwyn Jones described as “constructive” talks with George Osborne on the issue.

In their response, Plaid Cymru argued the announcement was long overdue, with one of its Assembly Members, Lindsay Whittle, saying:

“The under funding of Wales is a severe problem which is affecting Welsh communities today and it is high time full details of the UK government’s commission were released.”

It remains the case, however, that Mr Cameron’s remarks were short on detail, with little by way of a timescale and the exact nature of the proposed commission.

Indeed, during a debate in the Lords on the future of the Barnett Formula in June, government spokesman Lord de Mauley clearly argued that reform was not a priority, explaining:

“Following the Holtham and House of Lords reports, the coalition government said in their programme for government that they recognised the concerns expressed about the system of devolved funding, but that the priority must be to reduce the budget deficit and therefore any decisions to change the current system must await the stabilisation of the public finances.”

“The Government have no plans to change the Barnett formula at present but we will continue to keep all aspects of public spending under review.”

6 Responses to “Cameron commits to Welsh funding reform, but when?”