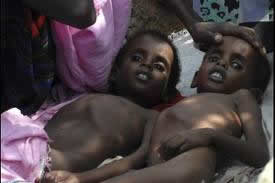 By Katherine Nightingale, Senior Humanitarian Policy Officer, Christian Aid; donations to the Disasters Emergency Committee’s famine relief fund can be made at: http://tinyurl.com/dec-east-africa-appeal

When the UN declared a famine in parts of southern Somalia on Wednesday, it was the country’s first for 20 years. Already, tens of thousands of people have died of malnutrition-related causes and the UN is now appealing for funds to help prevent the famine spreading.

The crisis has also hit parts of Kenya, Ethiopia, Dijibouti and even South Sudan and across the region more than 11 million people now need food assistance, according to the World Food Programme.

The disaster has also pushed hundreds of thousands to migrate to refugee camps like the infamously crowded Dadaab near Kenya’s border with Somalia.

The next major international development is likely to be on Monday, when ministers hold an emergency meeting at the UN’s Food and Agriculture Organization (FAO) in Rome. The FAO has said the meeting is not about pledges of money – but humanitarian organisations including UN member agencies will be desperately disappointed if it does not deliver major new funding for the crisis.

UN Secretary General Ban Ki-moon said on Wednesday that some $300 million is needed over the next two months alone, simply to prevent the famine spreading, and official figures from the UN put the funding gap between current appeals and money actually delivered at $854 million.

In the UK, the appeal by the Disasters Emergency Committee – a group of 14 organisations including Christian Aid, Oxfam, the British Red Cross and Islamic Relief – has so far raised well over £24 million. We are deeply grateful for this public generosity, especially at a time of national financial uncertainty.

Emergency workers’ immediate priority in east Africa is to save lives, with food, water, health care, shelter and sanitation, as well as seeds and tools in some areas, which will help people take advantage of the rains when they do come.

But we will not have done enough, if we solve the immediate crisis but then walk away when the rains have returned and people again have enough to eat.

This disaster is not simply the result of the region’s worst drought in 60 years – it is the drought combined with other underlying problems which should be tackled. They include extreme poverty, the violent conflict in Somalia and the increasingly extreme and unpredictable weather in the region, which may be the result of climate change.

Other fundamental challenges are the growing phenomenon of land-grabs – often by foreign investors – which are eroding people’s access to land for food. Governments’ discrimination against the region’s millions of pastoralists, who survive by moving their animals in search of pasture and water, is yet another important part of the picture.

There are also some fundamental flaws in the way that the international community currently responds to humanitarian crises. At present, early warnings are not taken seriously enough – in this case, the United Nations appealed last year for $500 million to address food insecurity in Ethiopia, Somalia and Kenya, but received only half of the funds requested.

The reluctance to give until people are already starving is one of the reasons why rich countries such as the UK should ensure they give 0.7 per cent of their national income to help people in poor countries. The UK government has promised to meet the 0.7 target and it should legislate accordingly.

Some of the money generated by rich countries in this way could be used to reduce disaster risks and strengthen local communities’ ability to prepare for and respond more effectively to crises such as the current one.

What should Monday’s FAO meeting achieve? At a minimum, the rich countries present must deliver enough money to keep people alive and ensure that the food crisis does not deteriorate further. But they should go further, in the knowledge that climate change is likely to exacerbate the challenges facing the region and damage people’s ability to produce food.

Only when G20 governments provide reliable sources of climate finance, to build developing countries’ resilience and help them adapt to the effects of climate change, do we have a chance of reducing the risk of food crises like today’s.

15 Responses to “East Africa famine: We need funds now, and to deal with underlying problems”