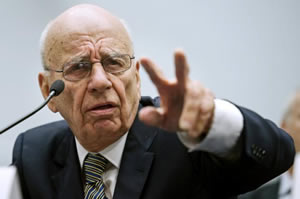 The latest allegations include:

• Scotland Yard has discovered references to Gordon and Mrs Brown in paperwork seized from Glenn Mulcaire;

• Abbey National found evidence suggesting a “blagger” acting for the Sunday Times posed as Brown and accessed details of his account – on at least six occasions;

• Brown’s lawyers Allen & Overy were tricked into handing over details from his file by a conman working for the ST;

• And, most shockingly, details from his infant son Fraser’s medical records were obtained by the Sun, who published a story about his serious illness.

Jeremy Hunt’s announcement heads off the possibility of a Commons defeat on a vote on the takeover on Wednesday. It follows Ed Miliband’s press conference this morning, in which he further ramped up the pressure, and came just before Mr Miliband challenged him in the chamber this afternoon.

Hunt’s referral, following his postponement of a decision till the autumn on Thursday, is a further blow to Rupert Murdoch, who is coming under scrutiny like never before.

“Protecting our free media is the most sacred duty I have as culture secretary. By dealing decisively with the abuses, this government intends to strengthen, not diminish, press freedom, and make us once more proud of the journalism that so shapes our democracy.”

To which the Leader of the Opposition replied:

“It should be the prime minister talking here today. The culture secretary has no responsiblity for the inquiry he is referring to. But he has been left to carry the can for a prime minister who knows that there are too many difficult questions for him to answer.

“Mr Cameron has failed by not coming to the House today, as he has failed at every turn in this crisis. He is running scared. This is a Prime Minister who is failing to show the leadership the country expects.”

Earlier, Mr Miliband had sought to turn up the heat on David Cameron at his press conference, saying:

“It is imperative that David Cameron now comes clean on the increasing number of questions surrounding his appointment of Andy Coulson. On Friday at his press conference, David Cameron said and I quote “no one gave me any specific information” which might have dissuaded him from appointing Andy Coulson.

”Yet the Guardian newspaper says it had discussions with Steve Hilton, his senior aide, detailing the facts about Andy Coulson’s decision to rehire Jonathan Rees, a convicted criminal.

”According to The Guardian, these included the fact that Rees had been jailed for seven years for a criminal conspiracy, after which he had been rehired by Coulson’s News of the World…

”This information was passed by Steve Hilton to the Prime Minister’s chief of staff Ed Llewellyn. You cannot get more specific information than this.

”Mr Cameron must now answer these and other questions including the warnings he apparently received from Paddy Ashdown and Nick Clegg.

”Unless he can explain what happened with Mr Coulson and apologise for his terrible error in appointing him, his reputation and that of his government will be permanently tarnished.”

Among the other main developments on the phone hacking front today are the reports that senior members of the Royal Family may have had their phones hacked, including Prince Charles, the Guardian reporting:

The heir to the throne and his wife are among at least 10 members of the royal household who have now been warned they were targeted for hacking, according to police records obtained by the Guardian. Only five had previously been identified.

A palace source on Monday confirmed to the Guardian that the prince and the duchess had been approached by police recently to be warned that they had been identified as likely targets of the News of the World’s specialist phone-hacker, Glenn Mulcaire…

It is believed that personal phone details for Prince Charles and Camilla have been found among the 11,000 pages of handwritten notes that were kept by Mulcaire and which were seized by the original Scotland Yard inquiry in August 2006.

The palace source said: “The question that has to be answered is: if somebody had access to this evidence back then, why didn’t they do something about it?”

Left Foot Forward will have more on the latest developments in the phone hacking story tomorrow.