The listening exercise report is being released today, and it remains unclear whether Clegg will get his way on the healthcare bill. 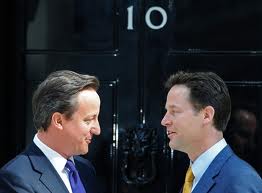 So, the Liberal Democrats have saved the NHS from their own reforms. You may recall these –  the ones their leader put his signature to and that their parliamentary party voted for twice. Nick Clegg told his party to “toast its success” in securing 11 out of 13 demands on NHS reform.

But wait: the Tories too are spinning. Sky News reports, from David Cameron’s meeting with new MPs, that the reforms are going full steam ahead, and any stories otherwise are “political posturing by the Lib Dems”. One MP said:

“The tone of the meeting was that this is a reforming government and the reforms are going to proceed.”

Meanwhile the listening exercise Future Forum report is only being released today, and it remains unclear whether or not Clegg will get his way and the whole bill will have to begin its journey through parliament again. Some Lib Dems remain worried however. Leading critic amongst MPs John Pugh, said:

“The role of [Stephen] Bubb in chairing the listening exercise on competition is seen by many as a clear conflict of interest.

Asking Sir Stephen to sum up on competition rules is as neutral as asking Simon Cowell to tell us about the merits of TV talent shows.”

Clearly, there is a lot more detail to be worked through, not least in the legislation itself, before policy clarity starts to emerge. The headlines this week will say more about politics within the coalition than provide an accurate forecast of how the NHS will change under coalition reforms.

So perhaps another brief “pause” is in order to reflect on the health policy landscape, over the last year. Four big themes emerge:

1. The NHS is a top political priority – again:

After neutralising it during the general election, Cameron now faces rigorous scrutiny of moves and motives. Lansleys reforms were in essence about taking political accountability out of the NHS. Yet as the FT comments (paywall):

“Far from removing the NHS from politics, his bill has injected more politics in to how the NHS should be run than at almost any time since 1946.”

2. Passing the bill is not the end for the coalition, it is just the beginning:

In their desperate rush to get reforming early, the coalition got the order wrong: legislation usually comes after consultation, not before. The legislative process will now drag on for many months more. Meanwhile, frontline service pressures are starting to build-up: trust hospitals which cannot function financially under the new regime, local authorities and NHS commissioners restricting eligibility to services, and waiting lists that are rising.

Given how fundamental are now the differences  – on commissioning and competition especially – between the coalition partners, it is hard to see how this will change in terms of health policy from now on. At a time when the NHS faces the biggest financial challenge of its existence, requiring 4 per cent cash efficiencies per year for four years, a scenario of health ministers will be playing out coalition power struggles (and blame shifting) is not unlikely.

4. The NHS reforms remain a solution in search of a problem:

The weakness of these reforms is that they were a solution, in this case full-scale markets for public services, chasing a problem. The NHS was already focused on an ambitious efficiency programme initiated by Labour, anticipating tighter settlements. The reforms have brought managerial chaos and uncertainty, and a £3 billion price-tag. Record public support for NHS service has not translated into any meaningful support for the coalition’s reforms.

Throughout this debate, Labour has consistently highlighted the failings of the bill, yet been subject to criticism that, six months after a leadership election, it does not yet have a detailed alternative. It will of course need more policy detail, but in fact Labour’s efficiency programme already anticipated the necessary change in direction following austerity in public finances.

Perhaps the real lesson is that the incremental reform approach  – a focus on standards, universal improvements, backed by comprehensive planning with a dose of selective competition –  of the Tony Blair and Gordon Brown years, that delivered high public satisfaction and respectable waiting times –  is a reasonable alternative to the spin and counter briefing that characterises coalition health policy today.