Retail sales fell by 1.4% in May according to Office of National Statistics figures released today, more than reversing the 1.1% increase in April, writes ippr's Tony Dolphin. 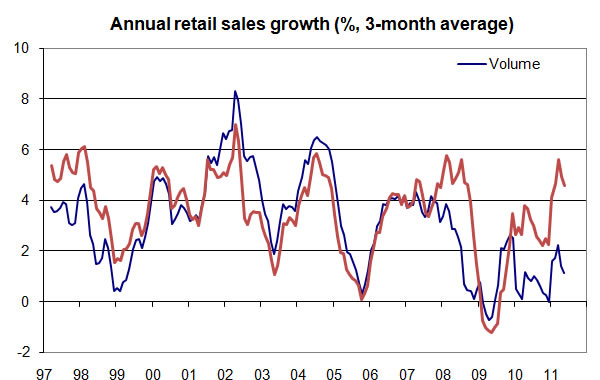 Retail sales fell by 1.4 per cent in May according to figures released today (pdf) by the Office for National Statistics (ONS). This more than reversed the 1.1 per cent increase in April, when sales were boosted by a number of special factors: good weather, the timing of Easter and the royal wedding. Putting aside the latest monthly volatility, what is striking is that sales have increased by just 0.2 per cent over the last year.

The biggest factor behind disappointing sales is higher inflation – particularly for food and energy. If other factors were mainly responsible, then we would expect both sales volumes and sales values to be weak. But, sales values are up 3.8 per cent over the last year – a little below par, but no worse.

In fact, given that average earnings have increased by around 2 per cent over the last year, and even allowing for an increase in the number of people in work and earning, what is most surprising is how much faster than household incomes sales are growing. This means one of two things. Either consumers are cutting back on other spending – on services which they regard as less essential – in response to higher food and energy prices, or they are saving less and borrowing more.

If they are cutting back on other spending, then it is likely that real GDP growth will continue to disappoint over the next few quarters and even the Office for Budget Responsibility’s (OBR) modest forecast for an increase of 0.4 per cent in Q2 will look too optimistic.

If they are borrowing more, then moderate growth is possible – but at the cost of a delay in the much-desired rebalancing of the economy away from a reliance on debt-fuelled consumption.

6 Responses to “Shocking news from the high street”