Shadow pensions minister Rachel Reeves calls on MPs from all parties to honour their commitments and vote down the unfair and unjust changes in the Pensions Bill 2011. 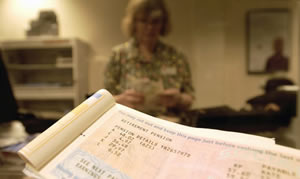 Today Members of Parliament have the chance to show that they are listening to their constituents – and putting them first, by voting down changes to the state pension age for women in their 50s. And the government have a chance to assure the women affected that they understand their plight and are willing to make the changes needed to make the Pensions Bill fair.

Government proposals would mean half a million women having to wait more than a year for their state pension, with 33,000 waiting exactly two years longer. We all know that life expectancy is increasing, and so the state pension age needs to rise.

But it cannot be right for a particular group of women to have their pension age increased at a faster rate than anyone else’s and with such little notice – these changes kick in from 2016, just five years from now, giving much less notice than the ten years notice that Age UK, the Turner Report and the Pensions Policy Institute recommend.

The women hit by these changes are the backbone of our families. The mums who took time off work to bring up children, the daughters who are helping their parents as they get older, and the grans who are providing childcare for their daughters’ children to help them balance work and family life.

These are women have done the right thing – looked after their families, worked hard and played by the rules. They want to be able to look forward to their retirement, not worry about how to make ends meet as they see the pension age changed again. Moving the goalposts so close to retirement is unfair and unjust.

Even Cameron and Clegg seemed to get it a year ago – the Coalition Agreement said that women’s state pension age would not start to rise to 66 before 2020. That promise is being breached and the government cannot explain why they are hitting women so hard. Noises from the government that they might try to amend their plans are welcome, but these women need certainty.

Instead they are bearing the brunt of yet another example of the chaos and shambles at the heart of this government, with widespread speculation that so close to these changes becoming law the government are now having to backtrack. Ministers need to listen, consult, consider all impacts of their policies, and then make policy – at the moment things are happening the wrong way round.

Petitions have been delivered to Downing Street, letters have landed on MPs’ doormats, and a lobby of women have come to Parliament. Today sees the first opportunity MPs have to show they’ve listened and are prepared to act. Today is the time for MPs from all parties to honour their commitments and vote down these unfair and unjust changes.