A Tory MP and backer of Lansley's NHS bill, given a platform at Conservative Home, has said that those opposing the reforms are tantamount to Stalinists. 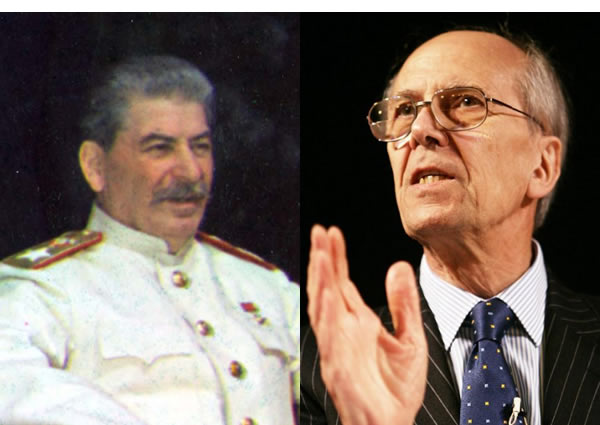 A Tory MP and backer of Andrew Lansley’s NHS reform plans, given a platform at Conservative Home, has said that those opposing the reforms are tantamount to Stalinists. This echoes the words of fellow Lansley supporter Dr Helen Evans, director of Nurses for Reform, who, having met face to face with Cameron, called the NHS a “Stalinist abhorrence”.

Andrew Bridgen is Conservative MP for North West Leicestershire. He wrote an article with the snappy title:

“Failure to introduce the NHS reforms would be tantamount to caving in to innovation-stifling Stalinists whose views have perpetuated poor health outcomes for too long.”

One of these so-called Stalinists appears to have been operating as a sleeper agent for some time. Lord Tebbit, under the headline “Don’t let David Cameron destroy our NHS”, wrote for the Mirror:

“What worries me about the reforms however is the difficulty of organising fair competition between the state-owned hospitals and those in the private sector.

“In my time I have seen many efforts to create competition between state-owned airlines, car factories and steel makers. They all came unstuck. The unfairnesses were not all one way and they spring from the fact that state-owned and financed businesses and private sector ones are different animals.”

“The inefficient NHS is a long way from perfect. There is much it could learn from the private sector, but there is a lot of good in it that should not be put at risk.”

Mr Bridgen, like many Tories perhaps, openly admits he had to look up the definition of the NHS. In his initial research: “Nowhere do I read ‘a system where these services have to be provided by the service itself’”. That is presumably what the honourable gentlemen calls a loophole.

He goes on to write

“As the NHS has provided for medical needs, many voluntary or charity run organisations have been edged out.”

Sadly, this suggests Bridgen is not a Left Foot Forward reader, as he seems to be unaware that voluntary and charity run organisations are being edged out of society as a whole due to the Tory-led government’s policies. He also seems to believe that private companies are opposed to edging out competition and perhaps believes they welcome the opportunity to have their profits and market share reduced.

He goes on to write:

“This has stored up problems which are only now beginning to surface, for example, the NHS finds end of life and social care provision challenging.”

As opposed to the ease with which private equity firms and Southern Cross have dealt with the problem.

“In seeking to bar competition, those opposed to these changes have obviously not learnt from the failed political regimes of the Soviet Union.”

It seems almost churlish to argue against this; so letting the charge stand, all those who are opposed to introducing competition, and thus perhaps EU competition law into the NHS, are either ignorant of the path from a public healthcare service to the Gulag, or…

“In conclusion I feel that if we fail to go through with these reforms, we are caving into the Stalinist protectionist elements that have been allowed to stifle innovation and competition in our Healthcare system.”

You might accept some of the points Bridgen makes in his article. However you may also be too terrified by the sheer scale of the Stalinist elements in British society, to see the NHS as a priority any longer. Thank heavens for the bankers eh? When was the last time their actions led to mass nationalisations.

7 Responses to “Is Lord Tebbit a Stalinist? Top Tory seems to think so”