Today’s job figures are good, but the news on public sector employment is turning gloomy much faster than expected - and there are quite a few other worries. 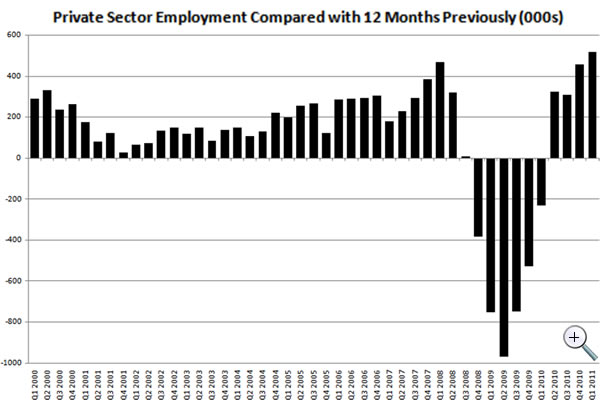 Overall, today’s job figures (pdf) are good, but the news on public sector employment is turning gloomy much faster than was expected and there are quite a few other worries.

The headlines are the obvious good news items:

• There were 80,000 more people in employment in February to April than in November to January;

• Over the same period the number unemployed fell by 88,000 (the largest quarterly fall since August 2000);

• The number of economically inactive people who want a job is 41,000 lower.

There are a number of caveats and some worrying figures, which I’ll come to in a moment, but these key results are very good. And they are more than a blip – the April and May figures were positive as well.

Today’s figures mean that the results for the past twelve months are good. Compared with February-April 2010, the latest data show 376,000 more people in employment and 57,000 fewer unemployed. Private sector employment has risen 520,000 over the last 12 months, the highest figure since the current series began in 1999:

Other figures don’t look so good. The number of vacancies fell again, to 456,000, and the ratio of unemployed people to vacancies actually rose, from 5.1:1 to 5.2:2. This ratio has been stuck at more than 5:1 for more than two years: 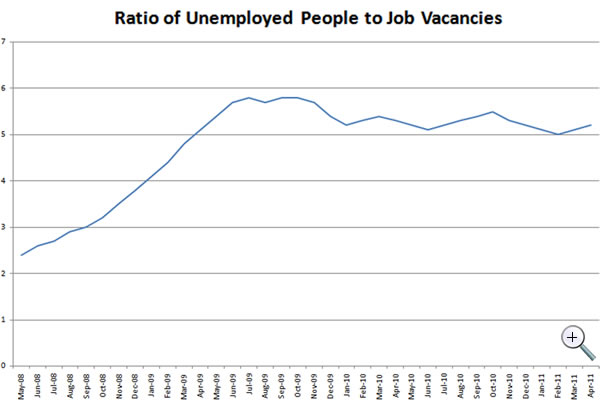 Men and women are still faring very differently – men’s employment rose by 70,000, women’s by just 10,000 and male unemployment fell by 64,000 while the number of unemployed women was down 24,000. The contrast is even more marked for year-on-year changes:

Earlier in the year, there were worries that improvements in employment were largely in “atypical” work – part-time and temporary jobs and self-employment. This is less the case than it was, as 257,000 of the 376,000 net employment increase are employees working full-time, but it remains a cause for concern.

But by far the biggest question mark over the employment figures concerns what is happening to public sector employment. Remember that the Office for Budget Responsibility’s (OBR) March Economic and Fiscal Outlook saw general government employment falling by 20,000 between 2010/11 and 2011/12.

The largest cuts so far have been in local government, where employment has fallen by 88,000. Another 37,000 have been lost in central government, including the NHS. Even these figures paint too favourable a picture – total public sector employment is artificially raised by the temporary jobs needed to carry out the 2011 census. When they are stripped out, total public sector employment in the first quarter of 2011 stands at 6.147 million – 158,000 lower than in the first quarter of 2010. Excluding the census jobs, civil service employment is down 29,000.

Looking at specific industries, NHS employment is down 10,000, education is down 24,000, public administration down 47,000. There is a tendency for the poorest regions to be hit hardest:

But the most important thing to remember about these figures is that the hardest cuts haven’t hit yet. Most of the announcements that built up last summer and autumn related to the 2011-12 financial year, which began in April; these figures are for jobs lost by the end of March. There are still tens of thousands of jobs due to be lost across the public sector.