Seldom can any electorate have been offered a less attractive electoral choice than Sepp Blatter versus Mohammed Bin Hammam for the FIFA Presidency, writes Sunder Katwala. 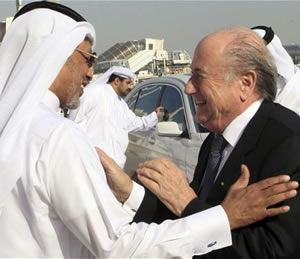 Seldom can any electorate have been offered a less attractive electoral choice than Sepp Blatter versus Mohammed Bin Hammam for the FIFA Presidency. That would have been like Nixon versus Nixon in a post-Watergate election in the United States. Yet Sepp Blatter has surpassed even that scenario. The election is off and the FIFA President plans to steam on, to be re-elected, unopposed, for a third term – whatever the cost to FIFA’s tattered public reputation.

Blatter has shown enormous chutzpah in the personal destruction of his opponent and former ally over charges of corruption, with dramatic pictures of banknotes allegedly handed out by the challenger.

Bin Hammam retorted that Blatter knew all about the payments – and that, if he was guilty, so was the President. At FIFA, it always seems to be déjà vu all over again.

After all, Bin Hammam was a key ally of Blatter when he won the FIFA Presidency in 1998. The Qatari provided the private plane for the Blatter campaign, though it was one which ended in controversy, with persistent allegations about why cash in brown envelopes had been flying around as the vote took place.

As Denis Campbell reported for The Observer:

At the press conference that followed his unexpected triumph over Lennart Johansson last June, world football’s newly installed supreme ruler was furious when a member of the assembled media boldly asked: “There is talk that your campaign was corrupt, that votes were bought by $50,000 in envelopes. How do you answer those allegations?”

The Fifa president reddened. “The game is over,” he replied, visibly annoyed. “The players have already gone to the dressing-room. I will not respond to this question.”

There was, it turned out, a perfectly innocent explanation, as the President later explained, for cash being handed out to voting FA delegations just before the vote. The cash handouts were simply an advance on the monies legitimately due from FIFA to their Football Associations – enabling them to receive their money quickly and efficiently, doubtless trusting that it would be returned home safely and used for proper footballing purposes for the development of the game.

Now as then, the central question is not whether FIFA needs reform, but whether reform is possible.

Many would find it difficult to find anything else in the world quite so badly governed as the apex of global sport. Yet governing bodies present themselves as the last bastion of absolute sovereignty in global politics, so perpetuating themselves as self-serving oligarchies.

The fundamental tension is between the assertion – indeed, the fact – that FIFA and the IOC literally ‘own’ the World Cup and the Olympic Games, so they cannot understand why the rest of us should even think of poking our noses into their private business. The highly selective mantra – keep politics out of sport – is always relevant when it comes to scrutiny; despite the governing bodies’ inability to resist grand political gestures, seeking new frontiers for their sport while privately lobbying to be considered for the Nobel Peace Prize.

This crisis has been a long time coming.

Back in 2000, I wrote a pamphlet, ‘Democratising Global Sport’, for the Foreign Policy Centre, which noted that the end of Juan Antonio Samaranch’s 20-year presidency of the IOC marked the end of an era in global sporting governance. Samaranch followed from the stage his contemporaries and collaborators as sport’s charismatic autocrats, Joao Havelange, the Brazilian who bossed football from 1975 to 1998, and Primo Nebiolo, the controversial head of world athletics for 18 years after 1980.

Each had transformed their sport – combining the votes of the developing world with the emerging power of the commercial sponsor to create multi-billion dollar sporting franchises. Sport’s old amateur and aristocratic Anglo-French elites were displaced, having failed to adapt to the rising powers of the age.

Yet the trick of those who globalised their games was to ensure that theirs remained a half-revolution. The informal ‘clubbable’ governing structures and closed cultures were retained, since they served the new elites perfectly well – even in a new multi-billion pound and dollar age:

“Together these visionary and charismatic autocrats seized the opportunities of the global age to change the face of sport. Their successes and their failures cast a long shadow for those chosen to succeed them. We shall not see their like again.”

So, with that global sporting revolution having taken place, their successors would prove to be vulnerable. The scale and income of sport was transformed beyond recognition. In many ways, the sports were more successful, with more reach, than ever before, and yet with the instability arising from the decreasing ability of the old governing structures to cope with the new finances flooding into sport – or the much sharper pressures of an age of accountability.

The question was how many more crises would it take for them to recognise that reform would prove inevitable as well as necessary.

As I wrote in that earlier pamphlet, there was an opportunity for reform from within, as well as pressure from without to force it:

“The most optimistic scenario is that of reform from within. This would see the next generation to govern sport recognise where their enlightened self-interest lies, and seek to put their political and commercial power onto a sustainable footing.

“The next generation to govern sport will pay a high cost for inertia and conservatism – unable to emulate the charismatic power or revolutionary role of their predecessors, they can either be pale imitations, unsuccessfully managing recurrent crises, or they can strike out to create new coalitions for effective governance.

“Serious and comprehensive reform is the only way that they could themselves become pivotal figures in the history of sporting governance – and would allow them to take the debate to their critics, forcing others to engage with the complex and difficult trade-offs in governing sport well today.

“But it would create immense organisational and cultural challenges – and require courageous leadership. While reform will, in the long-run, be the only sustainable route out of the crisis of confidence, this does not in itself guarantee that these organisations will manage to overcome the narrower interests which have frozen their structures to date.

“It is not impossible – transitional reformers from de Klerk to Gorbachev have often been those deeply ingrained in the dying governing cultures which they inherit. But it is probably more likely that there will be occasional, post-crisis stabs at reform without a real drive to deliver it.”

The IOC and FIFA have reacted differently to these challenges over the last decade.

Partly through the instincts of IOC President Jacques Rogge, and partly through concerted pressure from the US Congress after the Salt Lake City scandal, the IOC has made some significant attempt to rationalise its internal workings, remove at least some its most egregious members, and improve its accountability and transparency.

Meanwhile, Sepp Blatter, who was Havelange’s protégé and anointed successor has, if anything, made the governance of football more autocratic and more centred on personal loyalty to the leader himself. He has demonstrated a ruthlessness in defeating challenges from Europe, Africa and Asia, yet has had to destroy the reputation and workings of his association to achieve it.

So FIFA, rather more than the IOC, is now synonymous with misgovernance and corruption. Global football, therefore, remains in search of its Gorbachev candidate and its glasnost agenda.

Many expected, even this week, that Blatter would attempt one last reinvention as a candidate of reform in a final term. Yet he has preferred to deny that there is any crisis at all, beyond in the imaginations of his critics in the British media.

There is a rather more obvious candidate in Michel Platini, the French footballing legend who has been a popular and effective head of UEFA. His influence in FIFA has been more ambivalent. Platini’s personal integrity has never been in question – but he has played a waiting game, acting indeed as something of a Blatter loyalist in the hope of succeeding as the next FIFA President.

If Platini is to be football’s Gorbachev, perhaps his time to speak out would be today.