George Readings
6 June, 2011
A Britain We All Call Home

Counter-terrorism expert George Readings looks at the problem of Islamist extremism in university and examines what can be done to tackle radicalism. 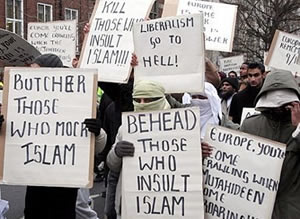 In an exclusive interview with the Sunday Telegraph, home secretary Theresa May yesterday warned that universities are ‘complacent’ over the radicalisation of their students.

Speaking ahead of tomorrow’s launch of the third UK ‘Preventing Violent Extremism’ (Prevent) strategy, she said:

“I don’t think they have been sufficiently willing to recognise what can be happening on their campuses and the radicalisation that can take place.

“I think there is more that universities can do.”

Her rhetoric reflects that of David Cameron’s Munich speech:

“Whether they are violent in their means or not, we must make it impossible for the extremists to succeed…

“We must stop these groups from reaching people in publicly-funded institutions like universities or even, in the British case, prisons.”

However, universities minister David Willetts has previously suggested he believes only a few individual students have become involved in extremism and that there is no wider problem on British campuses:

“I then ask the experts and the Security Services ‘what caused this to happen?’ Do we know that this person was radicalised as a result of being at a British university?

“…it is quite hard to pinpoint whether the university experience was the specific trigger.”

This comes after a report from Universities UK (UUK), the organisation representing British universities, said that universities should address only “aberrant behaviour”, claiming:

More recently, UUK’s chief executive Nicola Dandridge reiterated these sentiments in an interview with the Telegraph:

“I don’t think there has been any evidence suggesting that speakers who are offensive to many people cause violent extremism in the student audience. There is no evidence of that.”

This is despite a steady stream of individuals leaving British Higher Education institutions and going on to become involved in terrorism.

Most famously, Omar Farouk Abdulmutallab, who tried to detonate a bomb on board a plane to Detroit on Christmas Day 2009, was previously a student at University College London where he was involved at the college’s Islamic Society. Similarly,Roshanara Choudhry – who tried to kill Stephen Timms MP – was previously a student at King’s College London.

Abdulmutallab is not the only individual involved with an Islamic Society to go on to become involved in violent extremism. Others include Kafeel Ahmed (Queen’s University Belfast/Glasgow Airport attack), Waseem Mughal (University of Leicester/convicted of inciting murder for terrorist purposes overseas), Yassin Nassari (University of Westminster /convicted for carrying blueprints of weapons) and Waheed Zaman (London Metropolitan University/’liquid bomb’ plot).

It is not only the threat of terrorism that is a concern. A recent report from the National Union of Students (pdf) revealed that 31 per cent of Jewish and LGB students have suffered hate incidents because of their identity.

Peter Tatchell has identified a link between homophobic and anti-Semitic incidents on campuses and talks given there by hate preachers:

“Many Vice-Chancellors are too weak and cowardly to take a stand. They fear being branded racist and Islamophobic. Instead of challenging these false slurs, they cave in to the hate-preaching fundamentalists.

“The failure of many university authorities to take a stand against homophobic and anti-Semitic clerics is complicity with fundamentalism and radicalisation. It is collusion with the gateways to terrorism.

These are serious problems which the Government has promised to address. At the same time, there is a risk that the disagreement between Willetts, on the one hand, and Cameron and May on the other, may have hamstrung efforts to counter university radicalisation. Whether or not this is the case will be seen tomorrow when the new Prevent strategy is announced.

9 Responses to “Extremism at university: What is to be done?”